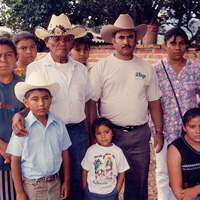 MacArthur’s media grantmaking has supported the production of several documentary films on migration and immigration in the U.S. and around the world. From the diverse experiences and journeys of migrants, to the issues facing changing communities, to the personalities and visions behind the process of crafting policy, these films illuminate the multifaceted nature of migration and immigration through the power of human stories. The Undocumented looks closely at the impacts of U.S.-Mexico border policy, through the stories of unauthorized immigrants who lose their lives crossing the deadly Arizona desert. Learn more › In the Middle examines the human consequences of the huge influx of migrants from Northern Africa seeking refuge on a small Italian island in the aftermath of the Arab Spring. Learn more › The State of Arizona takes a nuanced look at the implications of Arizona’s SB 1070, through the stories of opponents and supporters of the controversial law. Learn more › I Learn America follows a year in the lives of immigrant students who attend an international high school in Brooklyn, NY with classmates from more than 50 countries. Learn more › The 12-part series How Democracy Works Now tracks how comprehensive immigration reform went from almost assured passage in 2001 to an uncertain future in 2007. Learn more › Farmingville explores the diverse perspectives of the residents of a Long Island town, in the wake of an act of violence against two Mexican day laborers. Learn more › This 7-part series highlights the diversity of contemporary immigrant experiences through the stories of seven families and individuals from different countries seeking new lives in the United States.
Learn more › The Sixth Section examines the impact of financial remittances sent by workers in upstate New York to their home community in Puebla, Mexico. Learn more › Senorita Extraviada is an in-depth examination of the murders of women in the border town of Ciudad Juarez, Mexico, and the forces that have allowed this violence to continue. Learn more › Well-Founded Fear shows an inside view of the complex asylum process that people fleeing their home countries must navigate in order to remain in the United States. Learn more ›