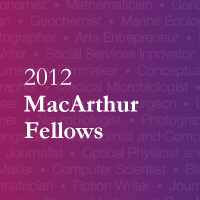 MacArthur named 23 new MacArthur Fellows for 2012. Working across a broad spectrum of endeavors, the Fellows include a pediatric neurosurgeon, a marine ecologist, a journalist, a photographer, an optical physicist and astronomer, a stringed-instrument bow maker, a geochemist, a fiction writer, and an arts entrepreneur. All were selected for their creativity, originality, and potential to make important contributions in the future.

The recipients learned, through a phone call out of the blue from the Foundation, that they will each receive $500,000 in no-strings-attached support over the next five years. MacArthur Fellowships come without stipulations or reporting requirements and offer Fellows unprecedented freedom and opportunity to reflect, create, and explore. The unusual level of independence afforded to Fellows underscores the spirit of freedom intrinsic to creative endeavors. The work of MacArthur Fellows knows neither boundaries nor the constraints of age, place, and endeavor.

“These extraordinary individuals demonstrate the power of creativity,” said MacArthur President Robert Gallucci. “The MacArthur Fellowship is not only a recognition of their impressive past accomplishments but also, more importantly, an investment in their potential for the future. We believe in their creative instincts and hope the freedom the Fellowship provides will enable them to pursue unfettered their insights and ideas for the benefit of the world.”

Among the recipients this year are –

Including this year’s Fellows, 873 people, ranging in age from 18 to 82 at the time of their selection, have been named MacArthur Fellows since the inaugural class in 1981.