Approaching the subjects of war and landscape from new perspectives to create images that blur the boundaries between fact and fiction and are rich with layers of meaning. 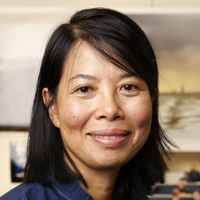 An-My Lê is an artist whose photographs of landscapes transformed by war or other forms of military activity blur the boundaries between fact and fiction and are rich with layers of meaning. A refugee from Vietnam and resident of the United States since 1975, much of Lê’s work is inspired by her own experience of war and dislocation. From black and white images of her native Vietnam taken on a return visit in 1994 to pictures of Vietnam War battle re-enactments in rural America, her photographs straddle the documentary and the conceptual, creating a neutral perspective that brings the essential ambiguity of the medium to the fore. In her series 29 Palms (2003–2004), Lê documents American soldiers training in a desert in Southern California before their deployment to Iraq. She focuses her camera alternately on young recruits and the harsh terrain in which they practice their drills, lending an obvious artificiality to the photographs that invites speculation about the romance and myth of contemporary warfare. Currently, Lê is documenting the U.S. military’s presence at sites around the world where personnel are undertaking training missions, patrolling international waterways, and offering humanitarian aid. An additional series in progress explores the ongoing ties between Vietnamese nationals who have migrated to southern Louisiana over the past twenty-five years and their homeland in the Mekong Delta. Approaching the subjects of war and landscape from new and powerful perspectives, this accomplished photographer continues to experiment and contribute profoundly to the evolution of her medium.

An-My Lê received B.A.S. (1981) and M.S. (1985) degrees from Stanford University and an M.F.A. (1993) from Yale University. Since 1998, she has been affiliated with Bard College, where she is currently a professor in the Department of Photography. Her work has been exhibited at such venues as the Museum of Modern Art, MoMA PS1, the Metropolitan Museum of Art, the Museum of Contemporary Photography, Chicago, and the San Francisco Museum of Modern Art, among others.