Optical Physicist and Astronomer | Class of 2012

Designing telescopes and other astronomical instrumentation that play a critical role in the search for Earth-like planets outside our solar system. 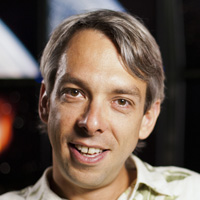 Olivier Guyon is a physicist who uses his expertise in optics to design telescopes that investigate some of the most compelling issues in contemporary astronomy, particularly the search for Earth-like planets outside the solar system. From our perspective, extrasolar planets (exoplanets) appear to orbit extremely close to their home stars but are ten orders of magnitude less bright; the ability to visualize exoplanets with conventional coronagraphs (which block light coming directly from a star) is a function of a telescope’s mirror diameter times four. Guyon invented an alternative coronagraphy method, Phase-Induced Amplitude Apodization (PIAA), which could reduce by nearly half the necessary instrument mirror diameter. This design significantly reduces the engineering and cost obstacles to deploying a planet-locating telescope in low-Earth orbit. Subsequently, Guyon identified the theoretical limit on the performance of such instruments; based on this analysis and related computational models, he compared the expected performance of several methods currently in use or under development, identifying their relative strengths and shortcomings. Currently, he is working to optimize the performance of ground-based PIAA instruments and their variants. Guyon has also made important contributions to other aspects of instrumentation, such as adaptive optics and low-cost, lightweight telescopes for amateurs. He is developing a diffraction-based technique for measuring tiny shifts in the position of stars against the stellar background due to the gravitational influence of orbiting planets, which could provide a powerful complement to existing exoplanet detection methods. In all aspects of his work, from theoretical calculations to laboratory fabrication, Guyon relentlessly tests and pushes boundaries to construct instruments that are key to one of the great scientific adventures of our time—searching the galaxy for other planets like our own.

Olivier Guyon received a Licence (2000) from École Normale Supérieure and a Ph.D. from Université Pierre et Marie Curie (2002). In addition to serving as an assistant professor in the Department of Astronomy and the College of Optical Sciences at the University of Arizona since 2008, he is also an associate member of the Faculty of Graduate Studies at the University of Victoria and a project scientist at the Subaru Telescope, National Observatory of Japan, in Hawaii.

Olivier Guyon is a core member of project PANOPTES, which is establishing a worldwide network of digital cameras used by citizen scientists to discover new exoplanets by looking for transit events.