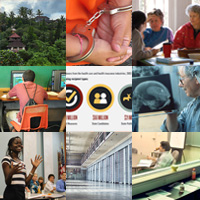 MacArthur today named nine organizations as recipients of the MacArthur Award for Creative and Effective Institutions. The Award, which recognizes exceptional nonprofit organizations that are engaged in the Foundation’s core fields of work and helps ensure their long-term sustainability, provides each organization with $350,000 to $1 million, depending on the size of its budget.

“From tracking money in U.S. elections to protecting the vulnerable in Mexico to reinvigorating civics education, these extraordinary organizations are tackling some of the most difficult social challenges and achieving outsized impact,” said MacArthur Vice President Elspeth Revere, who leads the awards program. “This award recognizes their leadership and success, and it is also a significant investment in their long-term future.”

Organizations use this critical support, which is large relative to their budgets, to build cash reserves and endowments, develop strategic plans, and upgrade technology and physical infrastructure.

For these Awards, the Foundation does not seek or accept nominations. To qualify, organizations must demonstrate exceptional creativity and effectiveness; have reached a critical or strategic point in their development; show strong leadership and stable financial management; have previously received MacArthur support; and engage in work central to one of MacArthur’s core programs.

MacArthur has a long history of building and strengthening institutions – from Human Rights Watch, now the largest U.S.-based human rights organization; to the Center for Responsible Lending that promotes and protects homeownership and family wealth; to Creative Commons, which has changed the way people use and think about copyrights.

About the MacArthur Award for Creative & Effective Institutions