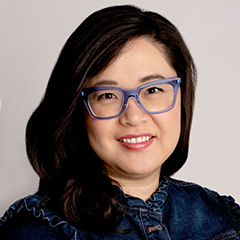 Kathy Im, Director of Journalism and Media, reflects on challenging the “master narrative” through support for strong, inclusive journalism.

With the passing of literary giant Toni Morrison this year, I was reminded of a passage in one of the most resonant books I have read in the past twelve months, Dear America: Notes of an Undocumented Citizen, by Jose Antonio Vargas. In this book, Vargas recounts a conversation he watched on PBS. It was Bill Moyers interviewing Toni Morrison about The Bluest Eye, in which Morrison tells Moyers about “the master narrative.” Morrison explains, “The master narrative is whatever ideological script that is being imposed by the people in authority on everybody else. The master fiction. History. It has a certain point of view.”

Earlier this year, the Journalism and Media team at the MacArthur Foundation—responsible for disbursing $25 million in grants for nonprofit journalism, documentary storytelling, and civic media—visited the National Museum of African American History and Culture in Washington, D.C. It is a beautiful and mesmerizing achievement of architecture and design, but more importantly, the museum is an epic retelling of American history. It is a reaction to, and correction for, the history most Americans have been taught: the master narrative. The reason we visited the museum as a team was to understand and underscore the profound and lasting effect our grantmaking choices can have on either reinforcing the master narrative or advancing a more complete, nuanced, inclusive, and oftentimes inconvenient American narrative.

A free and independent media is an essential pillar of democratic societies. But funding noncommercial, public interest media for the purpose of informing and engaging Americans can feel like a fool’s errand in this current atmosphere of partisanship, filter bubbles, and fake news. The master narrative relies on cynicism and apathy. It takes advantage of the powerless and promulgates a point of view in its favor. It allures with simplicity and empty promises about the American Dream. The master fiction is not written by one group or party, it is written, recorded, and repeated by all, especially those who are quiet and complicit.

We are as interested in who tells the story as we are in what stories get told.

MacArthur’s response is to support and strengthen the work of 105 journalism and media organizations that inform and activate Americans with new and different stories, uplift the voices and views outside the mainstream, address and remove the barriers that stifle free press and expression, and expose the misdeeds of the powerful. With tremendous urgency and clarity, we are funding the making and dissemination of just and inclusive news and narratives from Oakland, CA and Salt Lake City, UT to Detroit, MI and Whitesburg, KY. The work includes media training and activism, creative documentary storytelling, and investigative reporting. We are as interested in who tells the story as we are in what stories get told. We cannot give future generations a reason to build another museum for the purpose of correcting the inaccurate, negligent, and purposefully misleading stories shared and recorded about today.

Another influential book for me this year has been Decolonizing Wealth by Edgar Villanueva. For people of color working in philanthropy, Decolonizing Wealth has put front and center the duality and dilemma individuals like me encounter in our workplaces as we navigate and negotiate the rules and customs of philanthropy vis-à-vis our relationship with and expectations from communities of color. Thankfully, Toni Morrison offers another useful insight, “As you enter positions of trust and power, dream a little before you think.