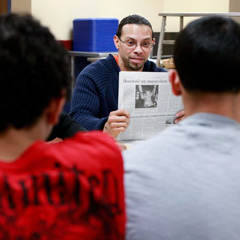 MacArthur began making grants to organizations in the juvenile justice field in 1996, when concern about rising violent crime rates among juveniles met with increasingly punitive responses from policymakers. In order to address public fears, a number of states adopted “tough on crime” measures that stiffened penalties for delinquent behavior, made it easier to try juveniles as adults in criminal court, and otherwise chipped away at the rehabilitative foundations of the juvenile justice system. By 2000, record numbers of youth were being held in detention facilities and other out-of-home placements.

Responding to these trends, the Foundation launched the Models for Change initiative, which aimed at promoting fairer, more effective, and more developmentally appropriate juvenile justice systems throughout the United States. Between 2004 and 2014, the Foundation invested more than $121 million in the work, intending to create sustainable and replicable models of systems reform. The ultimate goal was to bring about juvenile justice systems changes that would produce better outcomes for youth while maintaining public safety.

Six years into the initiative, in order to capitalize on Models for Change momentum and speed up the adoption of practices that would make states’ juvenile justice systems fairer, the Foundation collaborated with a group of funders to launch a multi-state campaign aimed at changing juvenile justice policy across the country. From 2011-2015, the National Campaign to Reform State Juvenile Justice Systems operated in 37 states, with the goal of enacting meaningful juvenile justice reforms in 75% of them.

From 2012-2016 the Foundation was in the legacy phase of Models for Change. The legacy phase was an opportunity for the Foundation to test a two-part exit strategy for completion of its juvenile justice activities. In particular, the aim of the legacy strategy was to facilitate a smooth transition from the juvenile justice field by securing and sustaining previous Model for Change reforms and to create momentum for a broader national movement of reform.

Models for Change grew from the MacArthur’s longstanding interest and involvement in juvenile justice, its understanding of the causes and consequences of troubled juvenile justice systems, its belief that smart strategies could lead to durable reform and its willingness to make sizable long-term investments to see strategies implemented.

Models for Change was composed of four intersecting strategies for social change:

The National Campaign to Reform State Juvenile Justice Systems worked with teams of local advocates, judges, law enforcement officials, and others in a series of states to identify the parts of their juvenile justice systems that needed change and to determine state-specific reform agendas. The Campaign then provided strategic, logistical, and financial resources needed to achieve these reform goals, including seasoned government affairs professionals, communications experts, and policy analysts to work with advocates, elected officials, and policymakers to advance reform agendas.

The Legacy Phase evaluation reviewed what has been achieved thus far to create fairer, more effective, and developmentally appropriate justice systems throughout the United States, documented the progress that has been made in eight goal areas of Models for Change, and assessed current capacity to sustain and grow Models for Change reforms in the years ahead.

Guided by lead entity organizations in each of the core states, Models for Change made significant juvenile justice reform progress. It contributed to systems reform by bringing people together and supporting the various forms of collaboration. Lead entities embraced the notion that systems reform required raising awareness, building knowledge, forming consensus, and eventually developing new skills among a host of stakeholders. Without Models for Change, states would not have been able to achieve the same level of stakeholder engagement and activation.

Further, all three action networks achieved positive results with at least three-quarters of the activities they pursued. Most action network activities were: associated with a change in practice or policy, well-received by stakeholders, replicated, sustained beyond an initial implementation period, or sustained with funding from sources other than Models for Change.

What Models for Change did especially well:

The main strengths of the National Campaign’s approach were that it was practical, flexible, and produced meaningful legislative results relatively quickly. Its main weaknesses were that it was, by design, a low-profile effort, did not appeal broadly to other funders, and did not necessarily enhance state capacity beyond the short-term.

The evaluation’s findings confirmed that the Foundation’s Legacy Phase was successful in transitioning out of direct funding of a national initiative, while building ongoing capacity to continue reform activities in multiple goal areas. The evaluation also found that the transition from the Models for Change grant-based initiative to a more decentralized, self-sustaining movement is still a work in progress and more needs to be done to complete the transformation envisioned by the Foundation. In all eight goal areas, certain gaps remain between targeted reforms and widespread practices. These findings have implications for how to build a national juvenile justice reform movement and accelerate the transformational change process going forward.