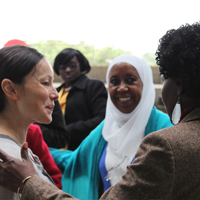 MacArthur uses a number of grantmaking tools to advance its commitment to building a more just, verdant, and peaceful world. Nearly two decades ago, the Foundation expanded its toolkit to include the MacArthur Award for Creative and Effective Institutions, which provides recipient organizations grant funds in the form of institutional support. As opposed to project-specific grants or general operating support, grants for institutional support are used to foster the long-term sustainability of organizations doing critical and innovative work in fields that are core to the Foundation’s mission.

Most recipient organizations reported that receiving the MacArthur Award provided an enhanced financial security and capacity, while also conferring a much-valued sense of credibility.

All of the recipient organizations interviewed through the evaluation mentioned the scarcity of flexible, institutional support from the funding community. From their perspective, the MacArthur Award has been a vital, all too unique source of institution-level support for non-profits.

Specifically, recipients reported that it helped them to invest in necessary, but unglamorous, areas of nonprofit administration, such as replacing outdated software, accounting systems, or customer relationship management systems; supporting ongoing maintenance of key intellectual or technological assets; and building a communications infrastructure.

The primary uses of the MacArthur Award among recipient organizations correspond to the guidelines established by the Foundation: most have allocated the award to a cash reserve. Yet many organizations see the so-called secondary uses—such as strategic planning, building technology infrastructure, etc.—as being equally, if not more, important than the primary uses.

For some organizations, the MacArthur Award served as a springboard for transformations that were already percolating at the time of their nomination or helped them to resolve long-simmering challenges about how to support their growth, often by using primary funds as a form of “change capital.” For instance, one recipient used the MacArthur Award to engage in the kind of strategic leadership succession planning that only sometimes happens in the nonprofit world.

We also found that the organizations that were, often coincidentally, in the midst of a strategic planning process when they were nominated for the MacArthur Award seemed best positioned to leverage the award for broad organizational change.

The evaluation also highlighted that the MacArthur Award’s structure—particularly its prescribed use categories—may not fully support organizational strengthening and long-term sustainability for its recipients.

In addition, the complementary supports, such as communications training, that come with the MacArthur Award have been moderately valuable to recipient organizations, but have the potential of becoming more valuable.