MacArthur announced a new commitment – Nuclear Challenges – that seeks to reduce nuclear threats, particularly by decreasing the availability of, and reliance on, weapons-usable nuclear material.

To address the nuclear threat, Nuclear Challenges will support efforts to identify political and technical solutions that reduce the world’s reliance on highly enriched uranium and plutonium. The Foundation is seeking the best advice from diverse fields, including the natural and social sciences, industry, and the policy community, and promoting collaboration, to inform effective nuclear decision-making.

The Foundation will support policy-relevant scholarship, expert and policymaker engagement, and dissemination of policy prescriptions, as well as advanced education on the nuclear threat. In particular, this new work aims to spur innovative thinking and build the human capital required to move this agenda forward.

"One overarching question motivates this work: How can we end the world’s reliance on weapons-usable nuclear material, thus reducing nuclear risk, while still meeting growing demand for carbon-free energy?” said MacArthur President Julia Stasch. “The destructive potential posed by weapons-usable material presents an existential threat that must be mitigated.”

Despite significant reductions in the number of nuclear weapons since the height of the Cold War, more than 15,000 remain today. Rising geopolitical tensions, the non-state actor threat, and command and control challenges raise the risk of accidental or intentional use. Just one detonation could change the contours of society. Multiple detonations at once could kill millions, devastate the environment, disrupt financial systems, and throw cities and countries into chaos. This destruction could occur in a heartbeat at any time, and presents an existential threat to life on earth.

Large quantities of the key ingredients for nuclear weapons—highly enriched uranium and plutonium—exist around the world. There are nearly 2,000 tons of these fissile materials in the global stockpile, which fuels existing nuclear weapons arsenals and includes enough additional materials to build tens of thousands of new weapons. Some countries are producing more fissile materials to fuel additional weapons. Worldwide, these materials are subject to varying degrees of security and susceptibility to theft or diversion.

Complicating matters is the dual-use nature of nuclear technology. As nuclear power plays a role in diversifying energy portfolios, reducing carbon emissions, and curtailing pollution, the policies and technologies countries adopt will have implications for international security. If countries fuel these civilian applications with nuclear material that could also be readily used for weapons, the risks intensify.

The challenge is to curtail the risk that nuclear technology will be used to add to weapons stockpiles while harnessing the same technology for peaceful purposes.

For more than three decades, MacArthur has supported efforts to broaden and strengthen the field of international peace and security. The Foundation has awarded more than 1,700 grants totaling more than $443 million in science, technology and security; weapons of mass destruction; and Asia security. Nuclear Challenges will now extend, and focus more deeply, on the Foundation’s longstanding support for reducing nuclear threats.

The Foundation is making just a few big bets that strive toward transformative change in a small number of critical issues of planetary and human survival, and human dignity. Nuclear Challenges is MacArthur’s third big bet; others aim to prevent climate change by supporting global leadership to curb emissions, and to address over-incarceration by changing the way America thinks about and uses jails. 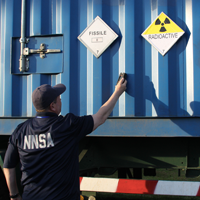 Joint Statement by Carnegie Corporation of New York and MacArthur on a Civil Society Gift Basket
More news on Nuclear Challenges
About Our Big Bets
View More About Nuclear Challenges
Stay Informed
Sign up for periodic news updates and event invitations.
Facebook Twitter LinkedIn Instagram Youtube Medium
Connect with us on social media or view all of our social media content in one place.