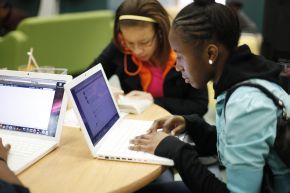 In support of President Obama's "Educate to Innovate" call to action, MacArthur and the Institute of Museum and Library Services (IMLS) today announced plans to create 30 new youth learning labs in libraries and museums across the country. Inspired by an innovative new teen space at the Chicago Public Library called YOUmedia and innovations in science and technology centers, these labs will help young people become makers and creators of content, rather than just consumers of it. These labs will be based on new research about how young people learn today.

"Our success as a nation depends on strengthening America's role as the world's engine of discovery and innovation," said President Obama. "I applaud the John D. and Catherine T. MacArthur Foundation, the Institute of Museum and Library Services, and their partners, for lending their resources, expertise, and their enthusiasm to the task of strengthening America's leadership in the 21st century by improving education in science, technology, engineering and math."

"With digital media, learning takes place anywhere, anytime. So we must break free of the old-fashioned notion that schools are the only places for learning and provide young people with engaging and diverse opportunities beyond the classroom,” said Robert Gallucci, President of the MacArthur Foundation. “YOUmedia is an excellent example of 21st Century learning. Bringing the model to other cities will mark an important step in motivating young people to learn and preparing them for a globally competitive workforce.”

With $4 million in funding MacArthur and IMLS will begin a planning process to launch a national competition to create 30 new learning labs across the country. As the primary source of federal support for the nation's libraries and museums, IMLS also will help to increase the capacity of museum and library staff to develop programming based on the most recent research about how young people learn today. Other partners — including the, C. S. Mott, Grable, John S. and James L. Knight, Mozilla and Pearson foundations, and the Chicago and New York Community Trusts — will provide additional resources to support the new learning labs. The competition application process, which will include a request for proposals, will be announced in 2011.

"This partnership helps to advance IMLS efforts to make libraries and museums places for 21st century learning. Projects like YOUmedia are pioneering efforts that use research and evidence to demonstrate how our nation's libraries and museums can be powerful and innovative spaces for young people's out-of-school learning," said Marsha L. Semmel, IMLS Acting Director. "Today these institutions are fueling science learning by tapping young people's interests, initiative, creativity and collaborative skills. IMLS has long supported research and model demonstration projects that explore the transformation of learning in the digital age. It is exciting to work in partnership to disseminate findings and models throughout the country.”

The MacArthur-IMLS learning labs will be part of a network of museums and libraries throughout the country that use best practice principles, based on research and evidence, to engage youth in effective science, technology, engineering, and math education. These new learning labs will be spaces for experimentation that engage young people with both digital and traditional media to promote creativity, critical thinking, and hands-on learning. Young people will be engaged in anytime, anywhere access through online social networks so that they can pursue their interests more deeply.