Scaling Up: An Interview with Laura Ghiron
May 12, 2022 | Perspectives | Population & Reproductive Health
Share On Social 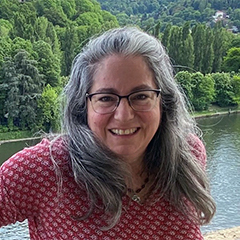 For nearly 20 years, ExpandNet has been advancing the science and practice of scaling up in the reproductive health sector and the broader development field. An informal global network and long-time partner of MacArthur’s programs, ExpandNet has been a grantee of the Population and Reproductive Health (PRH) program since 2004. As its final grant comes to a close, we sat down with Laura Ghiron, the President of Partners in Expanding Health Quality and Access, which administers ExpandNet. She reflects on ExpandNet’s journey and evolution–from focusing on scaling up sexual and reproductive health projects to testing and validating their approach across sectors, including education, water, sanitation and hygiene, and environmental conservation. This conversation has been edited for length and clarity.

Why has ExpandNet focused specifically on the science and practice of scaling up, and how does this relate to the field of global health and development?

While many, if not most ExpandNet members come from global public health, we have been increasingly invested in improving other sectors across the field of development. Many of us were working earlier with the World Health Organization and in countries on the Strategic Approach to Strengthening Reproductive Health Policies and Programs. This was a three-stage methodology that linked assessment with action research and scale-up, which was pretty unusual back in the '90s. A lot of research was being done, and it wasn't really going anywhere. In the field of contraception, we saw there was a disconnect: people were testing things that weren't grounded in women's and couples’ needs and rights and they weren’t designed for the systems intended to implement them. That's where the Strategic Approach was born. The fact was that the learning around scaling up at that time was not very advanced or well thought through by anybody. And there wasn't any good guidance to support it. That was the genesis of ExpandNet, because when we recognized that, we said to ourselves, "There is a niche, a gap that needs to be filled here. People need to have accessible information about how to proceed with scaling up."

Laura Ghiron, President of Partners in Expanding Health Quality and Access reflects on ExpandNet’s journey and what keeps her going after nearly 20 years.

Everybody wants to go to scale immediately, but what are the common pitfalls and challenges of scaling up that you have seen?

I call scaling up the “buzzing, blooming confusion” because it can be two steps forward and one step back at any time. That's because it's influenced by things like politics, budgetary processes, policies, and people's needs and opinions. Take for example the COVID vaccine scale-up, how complicated that has been, where you can see that people's needs and rights can have such a huge influence on what you think otherwise might be obvious and unanimously agreed as something that should be scaled up. The same is true of family planning. Prior to this experience, family planning may have been considered more sensitive than vaccines in the public health domain, but now I’m not so sure. 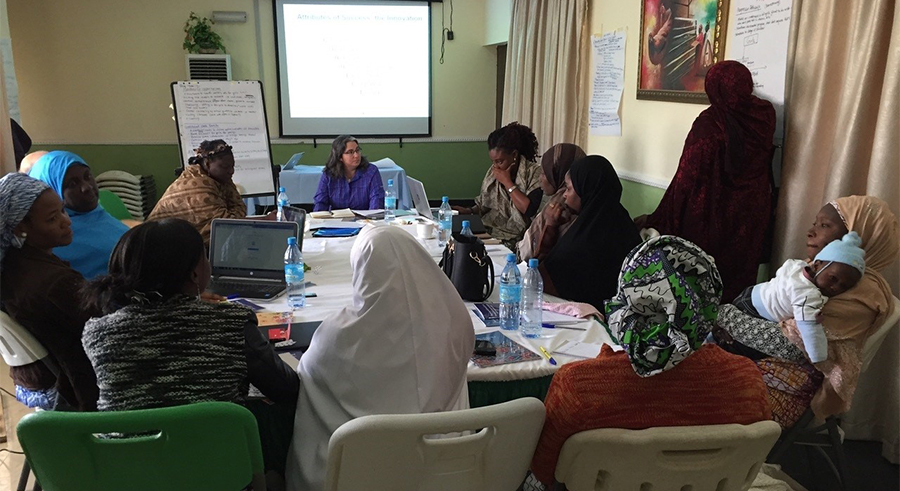 Laura Ghiron with the TEP Centre’s Lagos-based Utibe Henshaw, co-facilitating the development of a scaling-up strategy using ExpandNet/WHO’s Nine Step Approach with colleagues from the Center for Girls Education.

From my perspective, the pitfalls and challenges often come back to some of the core principles that we talk about in the ExpandNet framework and approach. Of critical importance is that scaling up has to be a participatory process where ownership of the process must be felt by, and reside with, the institutions that are supposed to adopt and implement the interventions on a large scale. If ownership is not there and instead perceived to be with an international NGO, then the scaling process is not likely to proceed as rapidly or smoothly and with the appropriate steps being taken.

The other big pitfall that we see in development is the disease of “pilot-itis" where there are so many pilots that are going nowhere. This has resulted in a backlash against pilots and yet pilots can play an important role in generating local evidence about how you might locally implement, for instance, an international best practice. But if you are just doing a pilot because you have some resources and it seems like a good thing to do, but it's not going to be linked to any scaling-up process, for me that is classic pilot-itis. In ExpandNet, we call this a project mindset. If you're working in a project mindset, you might create something that's complex and not very user-friendly. So we say, take a step back, try to figure out: what does the system need? How would this work in that system? And test it that way. Test it within that system, using the resources that are already there. Don't infuse a whole bunch of external resources, even technical ones. Try to figure out the most minimal package that's needed to benefit that particular area of need without all the bells and whistles. Because if you're not doing a simple innovation, you're going to have a really hard time scaling it up.

A third pitfall we see again and again is that even with those projects that are very valuable and merit-worthy, people don't necessarily think about the need to mobilize continuous funding. In other words, they do something great, but they're so busy doing that great thing that they don't figure out how to bring more resources to support the scaling-up process, or even just to support themselves to continue to support the scaling process. Sometimes that may be all that's needed to keep the process moving. So those are three of the big pitfalls that I could pinpoint.

What are some examples of organizations and projects that do sustainable scaling up in reproductive health, as well as water and sanitation, hygiene, and environmental conservation?

One of the reproductive health projects that was very focused on scaling up was the Urban Reproductive Health Initiative (URHI) that was underway in four countries, Nigeria, Kenya, India, and Senegal, back in the mid-2010s. These projects were initially understood and envisioned as proof-of-concept projects, where they wanted to try different things, see what worked, and then expand within those countries. 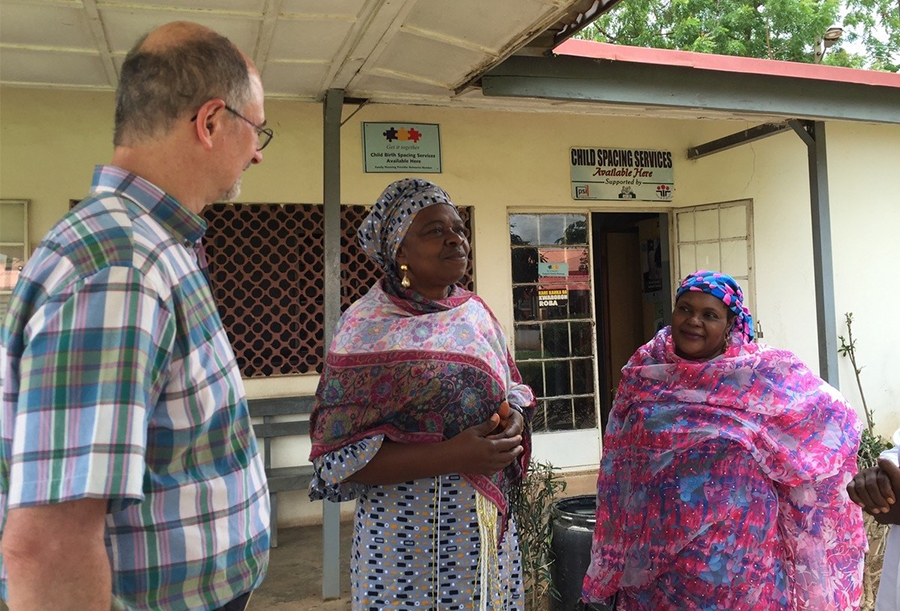 Early on, the Gates Foundation invited them to collaborate with ExpandNet. Our providing technical assistance to URHI helped the teams think about what makes scaling up successful and build that into their project approaches. When we were working with them on how to expand most strategically from the initial pilot cities to the expansion cities, they undertook scaling up strategy development work using our nine-step guide, and it changed much of how they had been thinking to proceed. They had initial ideas of how they thought they were going to scale up, but then they did this rigorous reflection process, and they reconsidered several of their approaches.

What was amazing to see was how much responsiveness they got from the governments they were working with, that really stepped into the ownership role that I was talking about earlier. It was an incredible transition for the teams themselves because they weren't used to working like that. As these projects were starting to wind down after five years, the Gates Foundation recognized that it would be important to further strengthen and stimulate government leadership. Sure, there was still a need to provide technical support to keep expansion going, but it was so exciting to see government really lead this work rather than the NGOs. This was an incredibly insightful way to support scale up, and now this work has evolved beautifully under a follow-on project called the Challenge Initiative, which is doing very exciting work in family planning and reproductive health.

How was ExpandNet born, and how did MacArthur relationships and support help you scale up yourselves?

MacArthur support was truly catalytic not just for ExpandNet but for others, like Management Systems International, who were also working on scaling up in parallel to us. When we first learned of our approval for our first MacArthur grant in 2004, we were convening a global meeting on scaling up in Italy at the Rockefeller Foundation’s Bellagio Conference Center. There we were 23 colleagues who had been working on the Strategic Approach in Bolivia, Brazil, Zambia, and Vietnam as well as from other scale up initiatives underway in China and Ghana. We all came together for the first official ExpandNet meeting to discuss scaling up, take stock of the field, review the ExpandNet framework paper we had prepared, and for colleagues to write their own papers on what they were learning about scale up in the different countries. 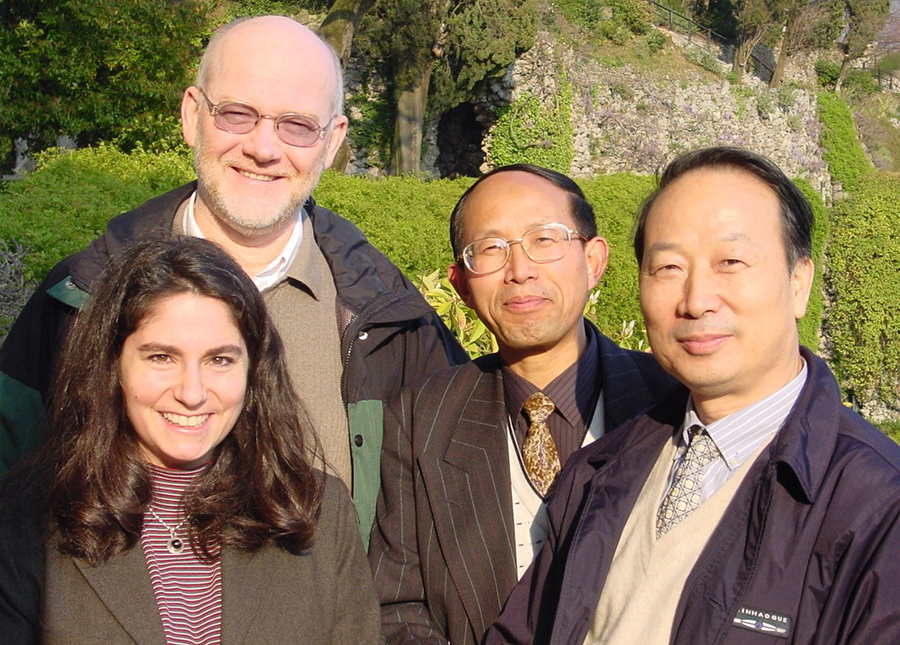 Dr. Chris Elias, then of PATH International and currently of the Bill and Melinda Gates Foundation; Dr. Zhang Kaining of the Kunming Medical Center and Dr. Xie Zhenming of the China Population and Development Research Center with Laura at the Rockefeller Foundation’s Bellagio Conference Center in 2003 where ExpandNet was founded.

We had already given ourselves a charter and a mission, and on the very last day we heard from the MacArthur Foundation that we had been awarded our first grant for ExpandNet. It was really a monumental experience at that time. It was in those discussions and their aftermath that we were all saying, "Everybody needs to work more on scaling up. There isn't enough guidance." As we spoke to more people the need for practical guidance emerged acutely, asking: "How do we do scaling up? What do we need to know? What do we need to think about?" And so that–together with the confidence and encouragement that came with that initial MacArthur support–started us off on this journey.

Fast forward to today–how do you continue to build that community of practice?

"We also want everybody working across development to be thinking systematically about scaling up."

In addition to ExpandNet’s work leading our own community, there is now a global Community of Practice on Scaling Development Outcomes that spans multiple sectors where we are very active. It has nine working groups focused on education, health, agriculture and rural development, climate change, nutrition, and many more. The opportunity to bring ExpandNet learning to that vast array of sectoral stakeholders is what we're looking toward. We also very much want to continue advancing work in our areas of passion which are family planning, reproductive and maternal health, and gender equity, ensuring that women can achieve their fullest lives and that couples can exercise their rights which still need to be addressed.

But we also want everybody working across development to be thinking systematically about scaling up. ExpandNet will be building an interactive platform called the Scale Up Learning Center over the next year and working to make ExpandNet’s knowledge more widely accessible. It will be open-source, since we want it to be something that anybody who wants to become a scaling up expert will have the opportunity to access. We're at the beginning of building it and we hope and are planning for it to help rapidly scale up scaling up capacity globally.

From 2004 to 2017, MacArthur awarded a total of $1,715,000 to the University of Michigan and Partners in Expanding Health Quality and Access to support ExpandNet and the science and practice of scaling up in the development field and across sectors worldwide.