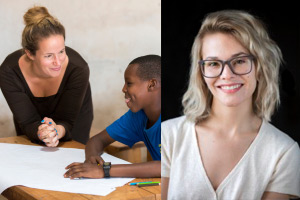 Coming into a new position can often be daunting, and, as a result, most organizations start new employees and teams with smaller projects. But after joining Southern New Hampshire University (SNHU) in 2016, one of the first emails in our inbox was from the university president asking us if we wanted to apply for MacArthur’s new and innovative competition: 100&Change. Seeking to secure $100 million was certainly no small endeavor; we were equally intimidated and enthralled by the prospects of achieving our first assignment.

President Paul LeBlanc was inspired by the success of our blended learning model in Rwanda, where refugee students complete a unique competency-based online degree program that delivers skills and professional competencies for 21st-century employment, with a particular focus on the business and tech sectors. Recognizing the potential to reach even more refugee and vulnerable learners, President LeBlanc encouraged us and our partner Kepler to dream—at a $100 million scale—about increasing access to higher education for refugees worldwide.

As we began to brainstorm and craft our proposal, we realized how exciting it was to think about scaling our impact at such magnitude. The flexibility of 100&Change allowed us the creativity to re-shape our highest-level goals in the context of an incredible opportunity—and thus the SNHU Global Education Movement (GEM) was born. Our application was written and revised across three different continents and six different cities before reaching its finalized state. We reshaped our academic model and approach for each new partner and country—Kenya, Malawi, South Africa, and Lebanon—ensuring we both upheld rigorous academic standards and molded ourselves to the environments in which we planned to serve students.

For us, one of the most transformational parts of 100&Change was the feedback provided by the judges of our application.

For us, one of the most transformational parts of 100&Change was the feedback provided by the judges of our application. Feedback on grant applications is extremely rare, due to the resources and capacity required, and also incredibly valuable. MacArthur’s commitment to transparency and feedback makes it a leader in the philanthropic world, and we hope that the regular provision of feedback is adopted as a best practice by other donors. We were able to use the critical and constructive feedback to further refine our proposal as we continued to connect with other opportunities. For example, we realized we needed to better describe our model and the criteria we used to select our partners and countries of operation. We also offered more depth on how we ensure refugees are offered employment in restrictive regulatory environments.

The 100&Change competition had impacts far beyond the eight organizations selected as semi-finalists. It not only inspired thousands of organizations and individuals to dream big, it went a step further by actively connecting top ideas with other funding opportunities. Our project had already been identified in the top 200 scoring proposals. So, when a prospective funder reached out to MacArthur seeking education and training proposals that had been researched and vetted, 100&Change Managing Director Cecilia Conrad made an introduction. That opportunity led to an $8.25 million donation from a group of anonymous funders as part of a seed investment in our ambitious dreams to create pathways for refugee higher education.

When a prospective funder reached out to MacArthur seeking education and training proposals, 100&Change Managing Director Cecilia Conrad made an introduction. That opportunity led to an $8.25 million donation from a group of anonymous funders as part of a seed investment in our ambitious dreams to create pathways for refugee higher education.

In addition, the spotlight on SNHU’s successful refugee education programs attracted other opportunities. In 2017, SNHU received funds from the Shapiro Foundation which subsequently attracted others to expand higher education opportunities for both U.S.-based “Dreamers” and resettled refugees.

So far in 2018 we have convened a partner summit in Rwanda, launched new GEM programs in Kenya, South Africa, and Malawi, and will launch our fourth site in Lebanon in October, in addition to continuing our work in Rwanda and tracking long-term outcomes. We are excited for the next two years of our “Series A” scale-up and look forward to future opportunities to work with MacArthur and other interested donors. We are also following the inspiring work of our colleagues at Sesame Workshop and the International Rescue Committee as they help the youngest generations of refugees to heal and learn together. We are grateful to 100&Change for kick-starting our scaling journey and helping us on our path to support refugee and displacement-affected learners to achieve far-reaching educational and employment goals.