It was a beautiful spring day in southern Texas, endless blue sky hanging over pastures just starting to green. But when Sharon Wilson pointed a sophisticated infrared imaging camera toward an oil and gas facility, she saw something shocking.

An enormous plume of dense hydrocarbon gases—invisible to the naked eye—blasted from the facility southeast of San Antonio and rolled across the pastures out to the horizon. Later, she would learn that it was triggering air pollution monitors more than 20 miles away.

“I was scared to even stay there or to start the car,” Wilson said, recalling the moment in 2014, the first time she’d used one of the cameras. “I thought, one spark and the whole place might blow up. I was horrified.”

Wilson investigates community complaints about oil and gas facilities for environmental watchdog Earthworks, which is harnessing “optical gas imaging,” or OGI, to document emissions of invisible methane and other hazardous, planet-warming gases to help people put a stop to them.

When Wilson, a fifth-generation Texan, first heard about the OGI cameras that industry uses to maintain equipment, she knew they could become a game changer if turned back on the companies. It was her idea to use the same technology to hold the industry to account.

Earthworks’ Community Empowerment Project is compiling a library of hundreds of videos while it works at the state level for stronger regulations and enforcement. The project aims to help eliminate 1.1 million metric tons of methane emissions, empower affected communities, and stop the oil and gas expansion propelled by advancements in hydraulic fracturing.

Their work has resulted in investigations, enforcement actions, and fines against operators in California, Colorado, New Mexico, Ohio, Pennsylvania, and Texas, which produce half of all oil and gas methane emissions in the United States. In New Mexico, for instance, the newly elected state land commissioner immediately pulled the permit of one operator after observing the site with Earthworks and stopped issuing permits in a sensitive area near Chaco Canyon, a UNESCO World Heritage site.

The group is currently putting a fourth field staff member through camera training at the same organization that certifies the industry’s video operators.

More than 12.6 million people in the United States live within a half-mile of an oil and gas facility, according to an analysis conducted by Earthworks and two other advocacy organizations. And many people are coming face-to-face with health risks that range from nosebleeds and asthma to an increased risk of cancer, according to peer-reviewed research to which Earthworks has contributed.

Methane also is a powerful greenhouse gas. While it does not last as long as carbon dioxide in the atmosphere, methane is 86 times more powerful at warming the planet in the near term.

The Rev. David Rogers has never seen an oil and gas boom like the current one in the 17 years he’s served as minister of the First Christian Church (Disciples of Christ) in Carlsbad, New Mexico. His congregants include a family whose land is surrounded by oil and gas operations. He says they suffer nosebleeds, breathing trouble, and headaches.

Wilson and other Earthworks staff visited the family in June while taking members of Rogers’ church and other faith leaders on a tour of oil and gas sites in the area. Through the camera, they could see plumes of emissions all around them. Moved by the experience, Rogers is making it his church’s mission to support impacted families and—with help from Earthworks—to press political leaders in the state capital, Santa Fe, for tougher restrictions.

“I couldn’t take on Santa Fe without Earthworks in my corner. We need their guidance and leadership, and they need our boots on the ground. That’s where the partnership becomes so valuable.”

The specialized cameras are calibrated to a narrow part of the electromagnetic spectrum where hydrocarbons absorb infrared light. So, when viewed through the camera, the emissions appear opaque.

Using the technology, Earthworks has captured spectacular releases, including a 2018 blowout at a natural gas well operated by Exxon Mobil Corporation’s XTO Energy unit in southeast Ohio. It forced the evacuation of residents and spewed millions of cubic feet of gas into the air for nearly three weeks before XTO capped the well. “The story would have been that it was a small accident at a single site, and that it was not really that big of a deal, and the operator had it under control,” she said. “But we could demonstrate that days later it was still spewing. And we showed that what happens at a single site really matters from a climate perspective.”

It can be risky work. Wilson has been illegally detained and threatened by oil and gas workers. She’s been exposed to fumes. Once, her shoes even melted to the blacktop of a Texas highway while recording in triple-digit heat. Given such challenges, Earthworks supplies field staff with protective gear, such as respirators.

The work is paying off.

Wilson’s tours have impressed the administration of New Mexico’s newly elected governor, which has laid out an ambitious climate change agenda and is revisiting 38 complaints from Earthworks that had stalled under the previous administration.

Democrats on the U.S. House Committee on Natural Resources were so jolted by what they saw on an Earthworks tour that they produced their own video on the issue and held a congressional hearing in Santa Fe, where they pledged to fight emissions. A month later, they introduced legislation to cut methane pollution by reducing venting, flaring, and leaks of natural gas on public lands.

“It was a profound and moving experience,” U.S. Rep. Alan Lowenthal of California told the hearing after visiting a site and wielding one of the cameras himself. 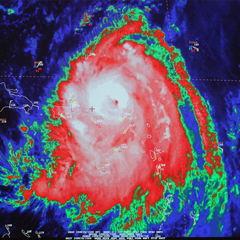