Ric Miranda was the self-proclaimed “graffiti guy” for a Chicago gang in the 1990s.

As he matured, he took a more productive path, landing a job in 2007 as an educational outreach specialist at Broader Urban Involvement & Leadership Development (BUILD), which supports young people impacted by violence in Chicago through a variety of programs, including art.

Miranda viewed his work as giving back to the community. Then he discovered that art helped him address the PTSD and depression he had dealt with for several years. Art became the core of his work at BUILD.

Today, Miranda is manager of the organization’s arts academy programs, enhancing empathy on a broader scale and bridging communities. He has brought together young people from opposing street gangs to create murals and eased tensions between Black and Latinx young people from different communities by having them work on murals representing leaders from both races. 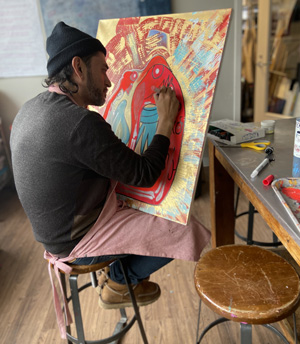 “It’s always been a healing tool,” Miranda said of art.

BUILD is among several human services organizations in Chicago that are demonstrating how arts and creative practices provide critical support to people and communities recovering from and interrupting violence.

Another is Firehouse Community Arts Center, where Pastor Phil Jackson and his colleagues focus on interrupting violence often by working with perpetrators of it. He uses what he calls the redemptive power of art.

A more fulfilling life and new self-image can start with something as subtle as receiving “props” for artwork or other new skills. Firehouse welcomes young people to the building and works with them to discover their life’s purpose. That process emphasizes creating art as a path to redemptive personal change.

“You’re recognizing something you had hidden away, that you have competency in this new thing,” Jackson said. “That gives you ‘juice’ or authority to replace the ‘juice’ you are forgoing by not being on the street. Part of our work is to find out what every man feels confident in and bringing that life to them.”

The goal is for personal change to spread peace through the neighborhood.

The physical action of painting or creating something by hand is a very soothing movement, said Rachel Wagner-Cantine, clinical director and dance/movement therapist at the Center for Creative Arts Therapy.

“For kids whose nervous systems are on all the time because they’ve had trauma, they’ve seen trauma, they are prone to violence themselves… the physical action actually helps to calm their nervous system, retraining neurologically what’s happening to the body.”

Choosing colors or tools to create something as simple as a papier-mache box can provide a sense of agency, ownership, and control for young people whose lives are unstable, Wagner-Cantine added. Creating art also can be invaluable in exploring, processing, and communicating emotions.

“Violence is a way to protect sometimes or to get a point across when you feel unheard,” Wagner-Cantine said. “Violence means power. But what are some other ways we can feel powerful? Anger is like an iceberg—most people don’t see 90 percent of what’s fueling it. (Art can help) getting below the surface.”

Using art to heal and empower is also a goal of BUILDing Girls 2 Women, another of BUILD’s programs. 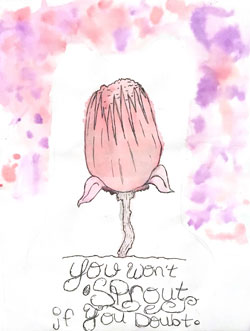 This summer, participants exhibited their paintings and drawings on Facebook Live. They also drew themselves heading toward lighthouses filled with supporters. In another exercise, the girls created two-sided self-portraits—one with the image they project; the other representing the way they feel.

Destiny Freeman, 14, used those creative practices to overcome feelings of alienation when she moved to Chicago’s Austin neighborhood from the suburbs in 2019. As an example, she pointed to her watercolor of a flower about to bloom above the words, “You can’t sprout if you doubt.”

“If I doubt what I could do, I couldn’t do anything in life,” Freeman said. “I want to be someone who inspires others to go out and do something in the world.”

The art forms are also delicate, dangerous, and boundary-pushing. Few people of color work in glass and ceramic art, which are art forms that require an extra level of trust in yourself and trust in others. 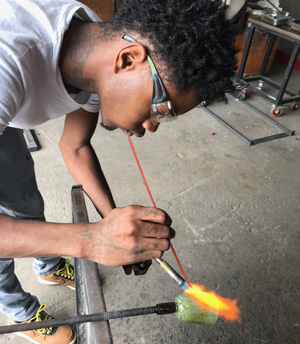 “These are powerful and necessary experiences for all of us but can be particularly meaningful to people with complex, layered trauma and/or PTSD,” Reyes said.

Deaunata Holman walked in Firebird’s studio shortly after his release from the hospital where he had recovered from gunshot wounds. He was struggling, lacked direction, and needed healing.

In the five years since, he has become much more hopeful.

“It’s easy to see the bigger picture,” Holman, 21, said of his experiences at Firebird. “You can see yourself transition into something you never thought you’d become—part of a team. No one should miss out on this chance. It feels so cool… you never stop learning.”