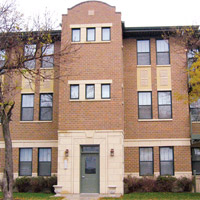 A study by The Urban Institute, a MacArthur grantee, examines whether the public housing demolition and relocation of former public housing residents into private, subsidized homes as part of the Chicago and Atlanta public housing transformations affected citywide and neighborhood crime rates. Public Housing Transformation and Crime finds that the transformations made a positive, and statistically significant, contribution to reduction in crime city-wide. However, crime fell less in neighborhoods that received a higher concentration of relocating households. Read the Urban Institute press release. View video of the study announcement.

Today we joined the Urban Institute for the release of their study Public Housing and Crime. The Urban Institute undertook this study with funding from the CHA and the MacArthur Foundation to better understand whether or not there was any relationship between the tear downs of public housing in Chicago and crime.This was important both as a way to guide the Authority and relocatees as they left CHA development and to provide us a more informed response to those who asserted that the tear down of public housing led to rises in crime in the city, in the suburbs and in far-flung communities from Memphis to DeMoines.

After three years of work, using a method that compared actual crime to the Institute’s model of expected crime, we have some results and are left with many questions.

...Crime in Chicago has diminished significantly over the past decade and according to the study’s modeling, the tear down of public housing has accelerated the decrease.

The first news is good news. As all have read – although it doesn’t always feel that way, crime in Chicago has diminished significantly over the past decade and according to the study’s modeling, the tear down of public housing has accelerated the decrease. The study found this to be true overall, where the researches posit that the tear downs have been responsible for an additional 1 percent decrease and in the communities where troubled developments were replaced by mixed income housing, that includes CHA residents. There crime of all types decreased by 200% percent.

The second piece of good news is that in the vast majority of the 74 communities to which former CHA residents moved the decrease in crime was as expected in the model. In other words the relocation of CHA residents had no impact on criminal activity.

The third finding of the report, when the researchers compared actual crime to the model’s expected crime, however, raises additional questions for further investigation.The study found that in communities where there were larger clusters of CHA relocates moving into already troubled communities, there was less of a decrease in crime than would have been expected from the statistical modeling used by the researchers.

It is worth noting that the study does not tell us whether CHA relocatees were either victims or perpetrators just that while there was still a dramatic decrease in all crimes, the decrease was less than the model predicted would have occurred without the presence of CHA relocatees.

The third finding in particular merits more research to understand the real dynamics:

More generally, this research adds to the growing body of data we – the City, the CHA and MacArthur have accumulated about the impact of the Plan for Transformation. Other things that we’ve learned from studies by the Urban Institute and others have measured other indicators that we are using as we access success and failure of policies and strategies and plan for the future. From these studies that look at the results of the impact of the nation’s largest re-conception of public housing ever undertaken we’ve learned that:

Just over a decade ago Chicago was the poster child for failed public housing policy for its failure to serve low-income families, neighborhoods and the city. Today, 12 years after Chicago took the bold step of tearing down the high-rise islands of poverty that isolated tens of thousands of Chicago Housing Authority residents from the rest of the city, Chicago is a model for true revitalization of communities and housing stock, as well as providing families with opportunities in one of America’s greatest cities. Residents have better access to community and supportive services and strong partnerships have been forged within new communities.

While residents and communities have seen tremendous success from the Plan, programs this bold and innovative don’t happen easily or perfectly. We learn both from what works and what doesn’t work as well. That is the only way progress can ever be made.

As we work with Mayor Emanuel and the CHA Board move to the Plan for Transformation 2.0, we will use this and other research to forge policies that build on the successes and address the challenges that have been documented by the Urban Institute, many other researchers and our own staff which carefully tracks progress throughout the year.