Early this month the Supreme Court, in deciding Roper v. Simmons, put an end the to use of the death penalty for people who were under the age of 18 at the time of their crimes. It was cause for quiet celebration by people and organizations across the country—the MacArthur Foundation among them—that have long argued that children should be accorded special consideration in the eyes of the law.

Special legal standing for juveniles in the country can be traced back at least as far as the founding of the first juvenile court in Chicago just over 100 years ago. Until March 1, 2005, however, that special standing had one glaring exception—the laws of this country made it possible to put young people to death for their crimes. With the Court’s decision, the United States has joined virtually every other country in the world in asserting that the death penalty should no longer be permitted in cases involving young men and women.

In 1988, the Supreme Court ruled that persons who were under 16 at the time of their crimes could not be executed. The Simmons decision extends that rule to 16- and 17-year-olds. While juveniles who are convicted of murder will be appropriately punished for their crimes, the Court ruled that, as a class, juveniles are not as culpable as adults, and not deserving of execution.

The work of many organizations, including those funded by MacArthur, can be found in the background of the Court’s decision. Discussion of their hard and effective work is the focus of this newsletter.

As always, we welcome your comments.

In the Court’s majority opinion, Justice Anthony Kennedy cited on five occasions an article in American Psychologist titled “Less Guilty by Reason of Adolescence: Developmental Immaturity, Diminished Responsibility and the Juvenile Death Penalty.” The article was co-authored by Dr. Laurence Steinberg of Temple University, director of the MacArthur Research Network on Juvenile Justice and Adolescent Development and network member Elizabeth Scott, of the University of Virginia School of Law. It was based largely on results of the Network’s ambitious research agenda.

The Research Network on Adolescent Development and Juvenile Justice was established by the Foundation in 1997 in response to a tide of criticism of the juvenile justice system, with critics on one side saying the system was not tough enough on juvenile offenders, and on the other side saying it did not live up to the need to treat juveniles as special cases in the eyes of the law.

It was a debate that was guided largely by opinion and not by fact. The members of the network embarked on a program of research designed to expand the base of knowledge about the origins, development, prevention, and treatment of juvenile crime and delinquency.

The network has focused on three broad themes that are proving important in shaping the way policymakers at the state and national level view juvenile justice issues.

You may want to listen to the report about the juvenile death penalty decision broadcast on NPR’s All Things Considered, which includes comment by Larry Steinberg.

In addition to its support for the Research Network, the Foundation provides support for a number of organizations engaged in juvenile justice issues and that worked closely together over an extended period of time on the juvenile death penalty issue. They include the National Juvenile Defender Center (formerly the Juvenile Justice Center of the American Bar Association) (Washington, D.C.), the Juvenile Law Center (Philadelphia, PA); and Northwestern University’s Children and Family Justice Center (Chicago, IL). There were, of course, many others involved in the effort including the National Coalition to Abolish the Death Penalty.

Each organization, in carrying out its own advocacy on behalf of young people, has been engaged for many years in the juvenile death penalty issue.

The American Bar Association's Juvenile Justice Center and the National Juvenile Defender Center—the ABA's project on improving counsel for youth, which this year became a separate and freestanding organization directed by Patricia Puritz—were among the core groups in launching the effort to abolish the juvenile death penalty. As the Director of the Center, Patti Puritz brought the full support of the ABA to this effort. For example, the Juvenile Justice Center provided support for attorneys representing plaintiffs in juvenile death penalty cases, including support for the legal team in the Simmons case as it made its way through the courts. The organization worked closely with state-based advocacy groups to support legislation to raise the age of eligibility for death sentences to 18; built coalitions with child advocacy, juvenile justice, medical, mental health, social services, and other organizations; coordinated the amicus strategy for the Simmons case, and housed the Web site of the Juvenile Death Penalty Initiative, which became a key organizing tool in the effort. The ABA—which adopted a resolution opposing the juvenile death penalty in 1983—also developed with the Youth Law Center and Juvenile Law Center the MacArthur Juvenile Court Training Curriculum, which applies the findings of adolescent development research to practice in juvenile courts nationwide.

Juvenile Law Center ensures that the child welfare, juvenile justice, and other public systems provide vulnerable children with the protection and services they need to become happy, healthy, and productive adults. The Law Center’s Executive Director, Robert Schwartz, is a member of the Foundation’s Research Network.   The organization’s Legal Director, Marsha Levick, was lead counsel on the amicus brief in Simmons filed on behalf of over 50 child advocacy groups.

Read the key documents related to the juvenile justice death penalty case on the Web site of the Juvenile Law Center.

Concerted Action When the Time was Right

Northwestern University’s Children and Family Justice Center, a MacArthur Foundation grantee for more than a decade, was another of the core groups involved in devising the legal, legislative, coalition-building and media strategy to abolish the juvenile death penalty. Center attorney Steven Drizin and Lauren Adams were deeply involved in the amicus strategy in Simmons and wrote portions of two amicus briefs filed before the Court. In November of 2000, the Center’s Director, Bernardine Dohrn, and Supervising Attorney, Steven Drizin, convened a meeting in Chicago of juvenile justice and death penalty attorneys. At this meeting, the core group unveiled and vetted its strategy. Adolescent developmental research, along with new and emerging teenage brain research, were central to the strategy of demonstrating through science that 16- and 17-year-olds were less culpable than adults.

These groups and others have met many times over the years. They have come to know one another well, and work closely together. In their work on the juvenile death penalty they used the medical and psychological research on adolescent development in their efforts to convince state legislatures to end the juvenile death penalty, efforts that were successful in three states, Wyoming, South Dakota, and Indiana.

These successes, coupled with earlier successes in New York, Kansas, and Montana, proved significant when Justice Kennedy said that one of the main reasons for the Supreme Court’s decision was the consensus that exists in the country against the death penalty for juveniles.

When the Supreme Court accepted Roper v. Simmons in 2003, the closely knit group of juvenile justice advocates was in a position to provide information useful to the Court in its deliberations. More than 50 child advocacy groups teamed up to file an amicus curiae brief on the case. It drew on, to a significant extent, the research done by the MacArthur network. Marsha Levick of the Juvenile Law Center and Steven Drizin of Northwestern University had primary responsibility for drafting the brief. Members of the Research Network on Juvenile Justice and Adolescent Development helped in the drafting of the amicus brief filed by the American Psychological Association, which was based primarily on “Less Guilty by Reason of Adolescence” by Steinberg and Scott.

The MacArthur Foundation believes that in grantmaking designed to support social change, an important first step is making sure that the research base of the issue is sound and that the results of the research are effectively communicated. The Supreme Court decision concerning the juvenile death penalty was an opportunity to see each of those elements in action, with a very clear result. How to Keep Kids Who Misbehave Out of the Justice System 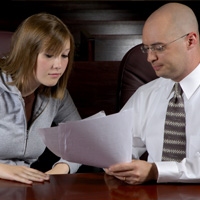