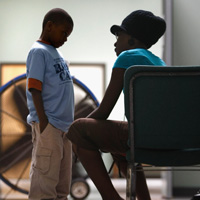 Minor juvenile misbehaviors, such as truancy and curfew violations, may lead to a youth being placed in a secure facility, surrounded by more serious offenders, and kept from their schoolwork, according to a MacArthur-supported report from the Texas Public Policy Foundation. The report assesses the nation’s progress in reducing confinement of youth found guilty of “status offenses”, actions that would not be illegal if committed by an adult, and finds that though the number of youth confined for status offenses dropped 52 percent from 2001 to 2011, the percentage of youth confined for status offenses in 2011 was still 4 percent of all confined youth—the same as in 2001. TPPF argues that handling status offenders in school, in the community, or at home increases the likelihood of the child keeping pace with their studies and not becoming more deeply entrenched in the justice system.