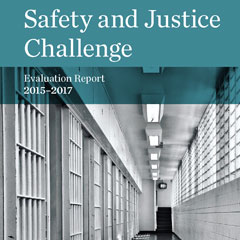 In 2015, MacArthur Foundation launched the Safety and Justice Challenge—an initiative to tackle over-incarceration, one of America’s greatest social problems. The over-use and misuse of jails disproportionately impacts communities of color, people with low-incomes, nonviolent offenders, and those with mental illness. The Challenge supports systems change efforts aimed at safely reducing incarceration and racial and ethnic disparities in jails.

We invested over $110 million in the first two years of the program to provide financial and technical support to local communities’ efforts to rethink their justice system and implement evidence-based solutions to safely reduce jail populations. We fund jurisdictions and engage strategic allies and community stakeholders to investigate the key drivers of overincarceration, improve local criminal justice systems, and build infrastructure for tracking data and performance monitoring. Investments in research generate new knowledge about how to reform local criminal justice systems, and complementary communications activities amplify the problem of jail overuse and effective solutions.

In 2015, the Foundation engaged RTI International to develop an evaluation framework focused on learning. The evaluation of the Safety and Justice Challenge is at the initiative level, thus it does not examine a single program or set of programs but instead seeks to understand how the Safety and Justice Challenge activities contribute to long-lasting and sustainable change within participating jurisdictions’ criminal justice systems. Rather than looking at all aspects of the initiative, the evaluation examines the elements that will provide an understanding of what is and isn’t working and why and the extent to which efforts are resulting in meaningful change across the multiple jurisdictions and levels of the initiative.

The evaluation design uses quantitative and qualitative data collection and analysis techniques and includes activities to measure the outcomes and impact of the initiative. Outcome evaluation activities assess the effects of the Challenge on criminal justice measures within the funded sites relative to a series of comparison sites. Impact evaluation activities document contributions from the Safety and Justice Challenge toward broader national changes in jail populations, increasing public awareness of jail misuse and overuse, and support for systems reform.

This report provides a framework for understanding the Safety and Justice Challenge. Much of the information in this report describes baseline trends nationally and in the implementation sites. Most of the data were obtained from public sources, but some data were obtained specifically for this evaluation, including site-level outcome data.

Subsequent reports will provide information on progress including measures of outcomes and impacts.