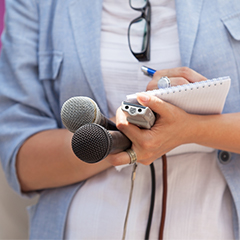 The Journalism and Media (JAM) program is an Enduring Commitment that builds on our long-standing tradition of support of the noncommercial media ecosystem. It is anchored in our belief that independent and alternative journalism and media are essential levers for positive change in U.S. democracy. In 2015, we updated the JAM strategy to address changes in the media, technological, and political environments.

We live in an era where mainstream news is often incomplete and prioritizes profit over representation, where disinformation campaigns seek to confuse and polarize, and in which public and corporate figures attempt to disparage or silence those that speak out against them. As a result, large segments of the U.S. public are misinformed, disengaged, and cynical about their role as civic actors and agents for social change.

The JAM strategy seeks to strengthen U.S. democracy by supporting accurate, just, and inclusive news and narratives that inform, engage, and activate people within the U.S. to build a more equitable future. It supports media as drivers of influence and change in public discourse, cultural norms, and policymaking with three distinct and complementary areas of work:

In 2017, we partnered with FSG to serve as an Evaluation and Learning Partner for the JAM program. The purpose of the developmental evaluation was to explore the extent to which the JAM strategy made progress from 2015-2020 toward its outcomes and to help us address three overarching questions:

FSG utilized a mixed methods evaluation design to address these key learning questions that involved collecting, synthesizing, and interpreting both qualitative and quantitative data from a range of organizations and people in the media ecosystem.

Overall, the landscape shows a window of continued opportunity, even as threats and challenges have been exacerbated in recent years. The journalism and media field continues to face threats from governments, is vulnerable to the spread of mis- and disinformation, is endangered by low levels of public trust in the media, and is facing a lack of sustained and unrestricted funding from philanthropy and other funders. In this context, the Foundation is providing critical and outsized support to organizations and individuals in the field.

The strategy has demonstrated substantial progress to date. Equipped with flexible, core support, grantees became stronger and more stable, which increased their capacity to tell stories that humanized issues by including the voices and perspectives of people and communities most impacted. General operating support was consistently highlighted as an approach that enabled grantees to grow, build infrastructure and capacity, experiment and take risks, weather political and economic turmoil, and, frequently, leverage funds from other organizations. Grantee convenings, connections, and other field-building supports enabled grantees to network and collaborate in new ways and, in the case of PCM, further define an otherwise nascent space.

Grantees shifted narratives to include more voices of and stories for and about BIPOC (Black, Indigenous, and People of Color), immigrant, refugee, and other historically underrepresented communities. An assessment of how grantees were talking about issues, using the COVID-19 pandemic and immigration as examples, showed that grantees were focused on telling the stories of marginalized populations, how they were experiencing exacerbated economic and social inequities, and failures of the government’s response to the pandemic and immigration issues. By elevating underrepresented and underreported stories in this way, grantees fulfilled their critical public service function of informing their audiences and equipping them with the information they needed to take action.

The JAM strategy’s theory of change and key assumptions remain valid, though serious challenges to democracy threaten to prevail. Despite the JAM strategy’s significant and meaningful contributions in many areas, the quality of our democracy is declining, civic engagement remains low among some populations, and political polarization is high, suggesting a lack of national unity. Now, more than ever, there is a need for the JAM strategy to continue creating and fostering the conditions necessary for a strong democracy that supports a more equitable future for all.