Translating practical designs into intricately coiled vessels that preserve the centuries-old craft of sweetgrass basketry and push the tradition in stunning new directions. 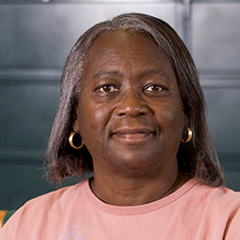 Mary Jackson is a fiber artist whose intricately coiled vessels preserve the centuries-old craft of sweetgrass basketry and push the tradition in stunning new directions. A descendent of the Gullah community of coastal South Carolina, Jackson learned to make baskets at the age of four from her mother and grandmother, who passed on skills brought to the United States by their West African ancestors. Developed originally as domestic and agricultural tools for cotton and rice production, sweetgrass baskets have traditionally taken such utilitarian shapes as storage containers and rice fanners. With masterful technique, Jackson translates these practical designs into finely detailed, sculptural forms. To maximize color contrasts, she incorporates other regional materials — strips of palmetto, long-leaf pine needles, and bulrush — into works that rise in rhythmic coils and demonstrate the remarkable strength and tension of her stitched constructions. Her innovations include the dramatically arched handle that complements the low, compact body of “Untitled with Handle” and the spray of unbound grass that spills from the lip of “Unfinished,” as if suspended in mid-assembly. Jackson is currently at work on a project of similarly bold and technically challenging proportions: an extremely shallow structure that spans five feet in diameter. As a founding member of the Mount Pleasant Sweetgrass Basket Makers’ Association, she also leads efforts to protect the threatened wetland habitats of sweetgrass and ensure continued local access to these resources. While preserving the culture and history of her ancestors, Jackson infuses this inherited art form with a contemporary aesthetic and expressiveness all her own.

Mary Jackson learned her family’s tradition of basketry at the age of four and has devoted herself full-time to this art form since the 1970s. Her work has been exhibited at numerous institutions throughout the United States, including the Renwick Gallery of the Smithsonian American Art Museum, the Museum of Arts and Design in New York, the Museum of Fine Arts, Boston, and the Museum of African American History in Detroit.