Revealing the structural basis for the metabolism of transition metals, critical cofactors in many biochemical reactions and possible source of pathology in diseases such as Alzheimer’s and ALS. 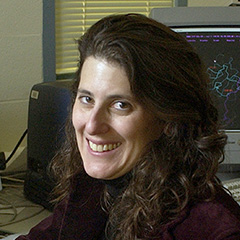 Amy Rosenzweig is a chemist whose work is revealing the structural mechanisms for metal metabolism in living cells. Transition metals such as copper, iron, and zinc play critical roles in the catalytic activity of many enzymes, but they can also be toxic if they accumulate out of control. Rosenzweig uses X-ray crystallography to explore the structural basis for the activity of proteins that regulate metal trafficking. Enzymes that use metals as cofactors are often located in the inner compartments of cells; metals are transported to these enzymes by another class of proteins known as “chaperones.” Each chaperone type transports a specific metal ion (e.g., copper) to its target enzyme. In one system, Rosenzweig’s group has shown that one end of the chaperone molecule shares a structural similarity with other copper-binding molecules and a second segment is homologous with the target enzyme, suggesting a geometric basis for the transfer of copper from the chaperone to the enzyme. Although Rosenzweig’s research focuses on bio-inorganic structures at the atomic and molecular scale, the implications for biology are profound. Aberrant metal metabolism has been identified as the critical factor in several diseases (e.g., Menkes syndrome, Wilson disease, familial amyotrophic lateral sclerosis), and may represent an important element in others (e.g., Alzheimer’s and prion diseases). Among other recent projects, Rosenzweig and her colleagues have explored the role of magnesium in beta-lactam formation; understanding this reaction will be important for overcoming resistance to penicillins and cephalosporins. Rosenzweig’s research expands our understanding of basic processes at the interface of bio-inorganic chemistry and cell physiology, and these findings are likely to have significant implications for the treatment of a wide variety of diseases.

Amy Rosenzweig received a B.A. (1988) from Amherst College and a Ph.D. (1994) from the Massachusetts Institute of Technology. She was an NIH Fellow at Harvard Medical School and the Dana Farber Cancer Institute before joining Northwestern University as Assistant Professor of Biochemistry, Molecular Biology, and Cell Biology, with a joint appointment in the Department of Chemistry (1997). In 2002, she was promoted to Associate Professor.