Reigniting research on an important chemical pathway and developing methods to enable modification of complex molecules with important implications for pharmaceuticals and other products we use everyday. 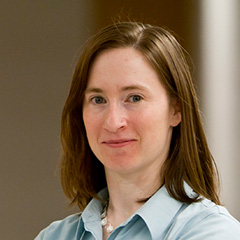 Melanie Sanford is a chemist reviving and enhancing approaches to organic synthesis previously set aside because of their technical difficulty. Her research focuses on using metal-based agents, primarily palladium, to catalyze reactions that substitute hydrogen in carbon-hydrogen bonds with other atoms or functional groups. Beginning with a reaction cycle widely regarded as too difficult to control, she developed a mechanism for taming palladium’s activity, making practical its application in the laboratory. Her methods enable modification of specific carbon bonds in complex molecules, while leaving other carbon bonds unchanged. These advances have significant impact for industrial chemistry, particularly in pharmaceuticals, where introduction of bonds like carbon-fluorine is desirable but frequently challenging in practice. Sanford's techniques often decrease the number of reaction steps necessary and increase the yield of the desired molecule. She pays equally careful attention to minimizing the generation of toxic by-products, thus contributing to the development of "greener" chemistry. Sanford is expanding her research program to include targeted synthesis of molecules with "handedness" — i.e., molecules having two configurations identical in shape but mirror images in their spatial orientation, like gloves. Limiting synthesis to a single orientation at the outset, rather than trying to separate a two-handed molecular mixture at the end, is a major objective in medicinal chemistry. Through her basic research on organometallic synthesis strategies, Sanford is opening new paths to making important compounds we use everyday, while diminishing the environmental impact of their manufacture.

Melanie Sanford received B.S. and M.S. (1996) degrees from Yale University and a Ph.D. (2001) from the California Institute of Technology. She was a postdoctoral fellow at Princeton University (2001-2003) prior to joining the faculty of the University of Michigan, where she is currently Arthur F. Thurnau Professor of Chemistry. Her scientific articles have appeared in such publications as the Journal of the American Chemical Society, Organometallics, and Tetrahedron.