MacArthur is committed to Chicago, our headquarters and our home. The Foundation seizes opportunities to work locally as an expression of civic commitment and because being rooted in Chicago yields a deeper understanding of issues faced by urban areas and how to address them.

Our Grantmaking in Chicago

Since 1978, MacArthur has invested nearly $1.1 billion in Chicago. Grants have supported more than 1,300 organizations and individuals in the region.

The Foundation has invested more than $200 million to support community and economic development, increase opportunities for low-income individuals and families, and prevent youth violence in Chicago neighborhoods.

In collaboration with partners in the region, MacArthur seeks to preserve and expand Chicago’s stock of affordable rental housing. The Foundation also played a major role in supporting Chicago’s historic plan to transform public housing high-rises into mixed-income communities. 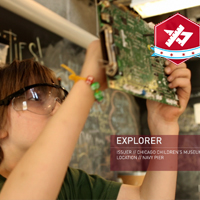 Chicago is home to three innovation sites for MacArthur’s digital media and learning work, which aims to support positive change in American education through creative approaches to learning.

Through its Models for Change initiative, the Foundation has invested more than $140 million in efforts to create models of juvenile justice reform through work in key states, including Illinois.

The Foundation’s policy research initiative includes special projects on the nation’s fiscal future—with a focus on states and localities, including Illinois—and immigration-related issues in the Chicago area.

MacArthur’s offices are in the historic Marquette Building. Completed in 1895, the 17-story building is one of Chicago’s earliest skyscrapers, and an example of the renowned Chicago School of Architecture. MacArthur was pleased to support its restoration and preservation and maintains a free exhibit in the lobby area that features information about the building’s architecture, as well as the work and history of the Foundation.