The following speech was presented at the Safety and Justice Symposium in Washington, DC on May 27, 2015. View CSPAN video of the presentation.

Thank you very much. I am Julia Stasch, president of the John D. and Catherine T. MacArthur Foundation. We are one of the nation’s largest private philanthropies, with headquarters in Chicago, offices in Mexico, India, Nigeria and Russia; we support organizations working in more than 50 countries to make the world a better place.

There is a growing consensus that the system of justice in our country needs serious attention, and the symptom of concern is a level of incarceration that not only leads the world but conflicts with the bedrock American ideal of fairness.

I want to thank each and every one of you in this room for your interest in this issue, and in the Safety and Justice Challenge, which is our attempt to address it. We appreciate your thoughtful engagement in what is the start of a concerted national effort to change and improve how America thinks about and uses its jails.

Today we announce the 20 jurisdictions that will receive funding through the Safety and Justice Challenge to plan for their reform efforts. The collaboration that begins here is just as significant for MacArthur as it is for you—our future partners. We share your commitment to fairer and more effective systems of justice at the local level and stand ready to support you along the way.

We know there is not a quick fix; so this promises to be a long journey. And, as with all long journeys, it is helpful to take one’s bearings at the beginning. Let me share with you some of the thinking that led us to engage with adult criminal justice, how this work relates to our identity as an institution, and what our hopes are for the work we will do together.

As I said, MacArthur, now almost 40 years old, is active in a range of issues and in countries around the world. Many of you have heard of our ambition to build a world that is more “just, verdant, and peaceful;” you may know about the “genius grants” or MacArthur Fellowships, the no-strings-attached awards to people who are exceptionally creative and effective, and our support for public broadcasting. These threads are central to our identity—a concern for peace, a flourishing environment, creativity, the public good and, of course, justice.

MacArthur’s first grant was to Amnesty International, an important signal about the importance of rights and justice. Since then, we have worked to strengthen the system of international justice and, for two decades, to improve juvenile justice in the U.S. We have also worked in other areas of American social policy. In each of our U.S. policy areas, we had an ambitious goal. Not just to attack particular problems, but to encourage deep change in the complex systems—governance, housing, education, work, justice, healthcare, and more—that shape the trajectory of virtually everyone’s lives.

We believe that improvements in these areas contribute to a stronger, fairer, more democratic America that is true to its best ideals. This brought us to the justice system, and the Safety and Justice Challenge. The justice system is so central to how society constitutes and regulates itself that it influences all other aspects of our common life. When the justice system fails, I think it is safe to say that virtually nothing else can succeed. But what, in criminal justice, constitutes real success? That is a harder question.

We began with a concern about the high rates of incarceration in America. I do not think I can add much of value to the great deal that has been said and written about this subject, except to be grateful that the magnitude of the problem is now well-known. It is enough to say that we cannot be proud to have so many Americans behind bars or that almost two thirds of them are people of color. We dedicate too many valuable resources to facilities and practices that, whatever their merits, also do tremendous harm to individuals, families, and communities. We can and should do better.

But crime is not a simple problem whose consequences can be wished away. The truth is that people do bad things to one another, crimes that must be deterred and punished. Whatever one’s views about incarceration, it is the end product of a complex set of actions, reactions, and interacting systems. If we were to have an impact on over-incarceration, we thought we should begin at the beginning—in local systems.

In towns, suburbs, and city neighborhoods, safety comes first—which is where we have put it in our initiative’s name. Safety is non-negotiable, not just in localities but for civilization itself.  Government that does not provide security loses its legitimacy, opening the door to an environment of fear in which community, freedom, prosperity, and creativity are not possible.

There is no better path to safety than what we call the rule of law. From effective deterrence and policing to due process and just punishment, all based on the imperative of equal, rational treatment, the rule of law is the indispensable foundation of a free society. These concepts we take as given.

But with regard to safety, we have reason to be optimistic. Great strides have been made over the last few decades. Violent crime and property crime are down dramatically. We are safer today than we have been since the early 1960s. But every success has its shortcomings. We may have passed the point of diminishing returns in our emphasis on safety. And, beyond question, the “war on crime” has produced serious collateral damage for our society.

Here is how. The American ideal places less emphasis on the exercise of controlling power than on the willing consent of the governed. Participatory democracy, even more than other modes of government, depends on trust, legitimacy, and the inherent justice of the social compact. This is why we chose “Justice” as the second element in our initiative’s name. Justice must be perceived to be reasonable and fair to be truly effective and for citizens to internalize its values and practices. When the rule of law seems intrusive, imposed, or oppressive, the social contract falters. I fear that, in many places, America is seeing this process in action.

Researchers have studied the experience of people in communities where contact with the criminal justice system is a regular part of life. Findings are sobering. They reveal the wide net that the system is casting: In 1980, only one percent of 18-23 year-olds who self-reported no criminal behavior had been exposed to parts of the criminal justice system. By 2002, this had grown to 13 percent. Misdemeanor plea bargains have created a large generational cohort with a criminal record. Many, many people who were not serious criminals are exposed to the controlling effects of the system.

The results of these encounters are profound, leading to “low levels of trust in politicians and public institutions and a diminished sense of standing.” Three-quarters of those surveyed in one study agreed that “leaders in government care very little about people like me.” Residents of heavily policed neighborhoods are less likely to report routine problems such as potholes and broken streetlights. In short, many people are withdrawing from society, hoping not to draw attention to themselves. This is the polar opposite of the ideal of constructive civic engagement.

The lesson is that, by its nature, the criminal justice system is extremely powerful. While in contact, from apprehension to incarceration, ordinary people have their rights radically curtailed. The experience of arrest, jail or prison profoundly changes how individuals perceive themselves and their relationship to society. If government, expressed through law enforcement, seems capricious or dangerous, people will cease to be fully participating citizens.

This is where our “Challenge” lies. How can we work toward a criminal justice system that secures and strengthens public safety while also ensuring democratic accountability? In particular, how do we change the way jails are used and perceived so that they do not undermine the credibility of and respect for the justice system. Incarceration is a powerful but blunt instrument. Can it be more surgical and effective? Can it be more fair?

We do not underestimate the scale of this challenge. The justice system usually encounters people when they are at their worst—yet we are asking those who work in the system always and everywhere to be at their best. We are looking for well-conceived and executed reforms in procedure and culture that raise levels of trust and reduce the harmful effects of encounters with the law—for both individuals and for our society. And, we are asking this of a system that is chronically underfunded in many ways, less than optimally designed, subject to local politics, bureaucratic infighting, and the conflicting goals of its disparate parts.

It is a tall order. But what we have seen in the proposals submitted by the jurisdictions represented here is an inspiring determination to make real and meaningful progress, to stretch imagination and will, to experiment and innovate, to serve, protect and support communities so that ordinary people can flourish in peace and security.

MacArthur is proud to have found partners who share our hope for the future. We pledge ourselves to you, to the task ahead. It will not be easy but it certainly is the right thing to do.

Let me applaud you for the work you do every day and for your aspiration to make that work more effective, more accountable, and even more in keeping with our democratic ideals. 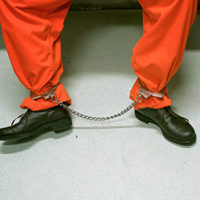 Keep Out of Jail Those Who Don't Need to be Locked Up: Op-Ed by President Julia Stasch
More news on Criminal Justice
View More About Criminal Justice
Stay Informed
Sign up for periodic news updates and event invitations.
Facebook Twitter LinkedIn Instagram Youtube Medium
Connect with us on social media or view all of our social media content in one place.