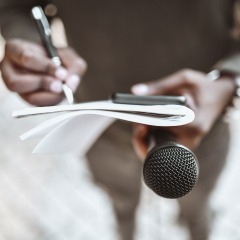 The often incomplete or inaccurate narratives, particularly about communities of color, reinforce existing power structures and perpetuate misleading stereotypes. In 2019, after being informed by recommendations from nearly 70 journalists, media makers, and storytellers from communities of color, MacArthur partnered with The Field Foundation on its creation of the Media & Storytelling Program, which provides grants to a more diverse set of Chicago news outlets, reporters, and media makers to ensure stories of all Chicagoans are told accurately, fairly, and contextually.

As part of its Jack Fuller Legacy Initiative, MacArthur has so far committed $6 million over six years that has supported 78 nonprofit media outlets and special reporting projects to date. The Field Foundation uses that support to award a range of grants, each in the amount of $25,000 to $50,000 three times per year, for content creation, editorial collaborations and partnerships, and operations and equipment. Funding for travel and professional development is also available. Learn more about requirements, deadline information and how to apply.

The following Chicago media outlets and projects have been supported by the Media & Storytelling Program:

Back of the Yards Neighborhood Council

The Chicago South Side Film Festival

Window to the World Communications, Inc.