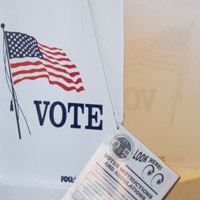 Eighty-eight percent of Americans who voted in last week’s election support establishing national standards for voting, including the hours polls are open, who is eligible to vote, and the design of ballots, according to a new poll by the John D. and Catherine T. MacArthur Foundation.  Currently, voting rules and procedures differ from one community to another, across as many as 10,000 voting jurisdictions, although the date of the Presidential election is shared by all.

Half of those polled are "strongly supportive" and an additional 38 percent are "somewhat supportive" of national standards.  Majorities of Republicans, Democrats, and Independents support consistent standards for national elections rather than the current approach of rules and procedures that can vary greatly from community to community.  The idea is so popular that it draws majority support from voters across all races, genders, incomes, and geographic regions in the survey.

"On the heels of an election that required some Americans to endure a long line to cast their vote and others to face confusing new requirements, the message from this poll is clear.  Our democracy and our electorate deserve better rules and procedures for efficiently administering federal elections," said MacArthur President Robert Gallucci.  "On Election Day, all citizens are equal, so it is important that we have voting practices in this country that are fair for all."

On a related question, voters surveyed are more likely to express concern about "eligible voters being denied the opportunity to vote" (64 percent) than about "ineligible voters getting to vote (36 percent)."  Democrats, Independents, and voters across all races, genders, incomes, and geographic regions agree on this question, though voters who supported Romney feel differently by a slim 51-49 margin.

MacArthur is exploring ways to strengthen democracy in the U.S., so that the issues the Foundation works on and other major issues confronting the nation – from climate change to health care, from our fiscal future to the criminal justice system, from immigration to education – will be more effectively addressed by our government.  The Foundation has already awarded $7 million in grants to support efforts to ensure fair elections and protect voting rights.  Grants also support information sharing and research regarding campaign financing and election administration, as well as an orientation program for new members of Congress.

Data were taken from the 2012 Penn Schoen Berland National Post-Election poll, which was conducted online among 1,202 Americans who voted in the 2012 Presidential election.  The sample was reflective of the overall electorate with 51 percent voting for Barack Obama and 48 percent voting for Mitt Romney.  The margin of error is +/- 2.83 percent.