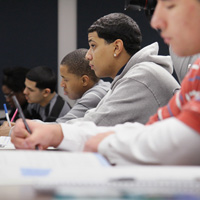 Building on its nearly 20-year, $150 million investment in supporting juvenile justice reform, MacArthur announced an additional commitment of $15 million to the field, in part to establish the new Models for Change Resource Center Partnership. The Partnership will provide judges, prosecutors, defenders, policymakers, advocates, probation officers, and mental health and social service agencies with much needed technical assistance, trainings, tools, and resources to help advance juvenile justice reform across the country.

“Reforms like the elimination of life without parole for juveniles and raising the age at which people are tried as juveniles are examples of progress toward a system that is fair, just, and humane in its treatment of our nation’s youth,” said Laurie Garduque, Director of Justice Reform for the MacArthur Foundation. “There has been so much progress made over the past decade toward better outcomes for kids, their families, and their communities. But there is so much more to do and juvenile justice reform must continue.”

The Partnership is based on nearly twenty years of research, practice, and reform efforts that have reached more than 35 states, much of which was made possible by the Foundation’s Models for Change: Systems Reform in Juvenile Justice initiative. MacArthur’s juvenile justice work is grounded in the seminal research funded by the Foundation that showed that adolescents are fundamentally different from adults, and that treating juvenile offenders as adults, relying on incarceration, and failing to commit resources to rehabilitation and treatment is expensive, jeopardizes public safety, and compromises future life chances for young people in contact with the law. This latest round of funding by the Foundation will also support development of the Juvenile Justice Resource Hub, a comprehensive source of information on leading-edge juvenile justice issues and reform trends, among other initiatives.

The Resource Center Partnership will further the Foundation’s goal of protecting kids while making communities safer and improving the effectiveness, performance, and outcomes of the juvenile justice system. The new Partnership consists of four Resource Centers that will be fully operational by the end of 2013. The Centers will focus on areas critical to continued change in juvenile justice:

The newly launched Resource Centers include:

To help further enrich the tools and trainings offered by the Centers, as well as ensure that practitioners and policymakers who may benefit from the resources receive them, the Partnership also includes a strategic alliance of national experts and organizations. These strategic allies, including the National Conference of State Legislatures, the International Association of Chiefs of Police, and the National Center for State Courts, among others, represent state leaders, local elected officials, law enforcement, prosecutors, corrections professionals, judges, court personnel, and justice reform advocates, whose willingness to coordinate and work with diverse partners on juvenile justice issues has been and will continue to be critical to advancing reforms.

“State lawmakers across the country are actively working to improve the quality of juvenile justice systems and outcomes for youth,” said Sarah Brown, Program Director of Criminal Justice for the National Conference of State Legislatures (NCSL). “The MacArthur Foundation has been a strong partner with NCSL and state lawmakers to assist in these efforts, and the new Resource Center Partnership will provide legislators and practitioners in the field with enhanced resources, research, technical assistance, and support for effective implementation of juvenile justice reforms.”

Learn more about the Resource Centers ›