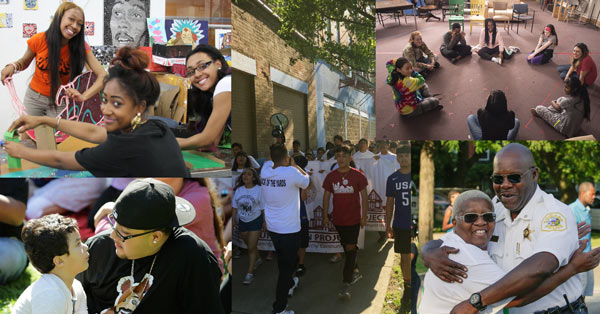 MacArthur today announced nearly $10 million in new grants to Chicago organizations to help them grow stronger or expand and to prevent gun violence.

“MacArthur is committed to Chicago’s diverse neighborhoods and its people, as we have been for decades,” MacArthur President Julia Stasch said. “We want our hometown to be a city where opportunity is equitable and justice can thrive. To make that aspiration a reality we are investing in the strength and growth of nonprofit organizations that focus on justice, provide critical services, build communities, look at persistent problems in new ways, and support a new generation of leaders.”

Justice is a central tenet of the Foundation’s work. In Chicago, MacArthur supports efforts to prevent violence, reduce incarceration, build trust between police and the communities they serve, and improve the effectiveness and legitimacy of the local criminal justice system. New grants totaling $3 million continue a long-term effort to help prevent violence and reflect MacArthur’s investment as part of a timely, issue-focused civic partnership.

Building on MacArthur’s four-decade commitment to Chicago, the grants announced today reflect the Foundation’s new approach to helping achieve a better Chicago for all. The strategy aims to help strengthen local organizations, support civic partnerships on timely issues, invest in initiatives to build vital communities, and advance diverse and influential leaders. Additional grants will be announced later this year.

“In 2016, MacArthur spent several months listening to individuals and organizations representing a wide variety of issue areas, populations, sectors, and neighborhoods, with a goal of understanding their perspectives and needs,” said Chicago Commitment Director Tara Magner. “Those conversations guided our thinking and directly informed key elements of our Chicago strategy. The awards we are announcing today represent our first investments in a new strategy to help make Chicago a more just place where neighborhoods are strong and residents thrive.”