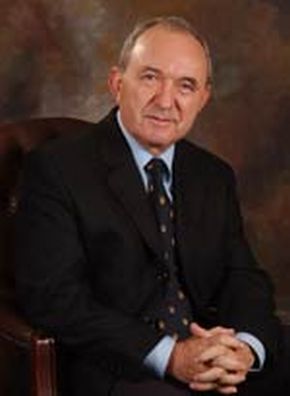 As the first Chief Prosecutor of the Tribunals for Rwanda and the former Yugoslavia, Goldstone helped shepherd these courts, the first of their kind since Nazi war criminals were tried at Nuremberg following World War II. In 1995, Goldstone filed charges of genocide and crimes against humanity against Bosnian Serb leaders Radovan Karadzic and Ratko Mladic for their roles in the “ethnic cleansing” of Bosnian Muslims, as well as torture, rape, the shelling of Sarajevo, and the sacking of mosques and Catholic churches.

Prior to his appointment as Chief Prosecutor in 1994, Goldstone was chair of the Commission of Inquiry Regarding Public Violence and Intimidation (commonly called “the Goldstone Commission”) in the aftermath of apartheid in his native South Africa. His service on the Commission proved invaluable to the democratic transition in that country, where he also served as an inaugural justice of the Constitutional Court. He currently serves as the first Spinoza Fellow at the Netherlands Institute for Advanced Study.

In accepting the Award, Justice Goldstone said, “I am delighted that the MacArthur Award recognizes the centrality in the 21st Century of international criminal justice. It is a system that withdraws impunity for war criminals even if they are sitting heads of state. It is also a system that recognizes the inherent dignity of all human beings and seeks to bring official acknowledgement to victims of atrocity crimes.”

“As Chief Prosecutor of the UN International Criminal Tribunals for Rwanda and the former Yugoslavia, Justice Goldstone displayed a mature, meticulous, and measured exercise of his mandate that reanimated the enterprise of international justice, bringing both a degree of resolution to victims and a new model for the prosecution of crimes against humanity,” said MacArthur President Jonathan Fanton, who presented the Award. “Insisting on the independence of the counsel and judges, a transparent establishment of the facts in each case, due-process protections for the accused, and the centrality of first-hand testimony from witnesses and surviving victims, he gave the Tribunals moral authority and legal credibility. Justice Goldstone stood guarantor for the responsibility, probity, and value of international justice; his unquestioned competence and integrity won the faith of the world.”

The MacArthur Award for International Justice, which was presented last year to former United Nations Secretary-General Kofi Annan, honors individuals and organizations that have:

Op-ed by Justice Goldstone on the growing power of the international justice system (International Herald Tribune, 5/31/09)