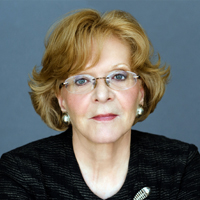 Julia M. Stasch, who has served as interim president for the past eight months, has been chosen as the next President of the John D. and Catherine T. MacArthur Foundation. Her leadership has already led to a greater sense of urgency, more focus, and enhanced impact in the Foundation’s grantmaking and its creative efforts to help address some of the world’s most challenging social problems.

“During a far reaching presidential search over the past eight months, we watched Julia rapidly changing the work and the point of view of the foundation. We realized that she was already the president that we hoped to find,” said MacArthur board chairman Marjorie Scardino.  “We wanted someone with a breadth of experience, who thinks big and has a bias for action, who has run a complex organization and can select and lead smart people. Julia has shown us that she is that person.”

Specifically, Stasch and the Foundation’s staff have –

“I am honored to be asked to help bring MacArthur’s significant assets to bear on the complex and challenging problems of our times,” said Stasch. “I will do it with the urgency, rigor, and humility that this work requires, and with a deep respect for the many organizations and individuals that actually do the hard work of making the world a better place.

“Even as we support existing work and explore new areas, we also will seek public input into the design of a new competition that will offer $100 million for meaningful progress in solving a single important social problem,” said Stasch.

I am honored to be asked to help bring MacArthur’s significant assets to bear on the complex and challenging problems of our times.

Before joining MacArthur, she was chief of staff for Mayor Richard M. Daley, housing commissioner for the city of Chicago, deputy administrator of the 20,000-person General Services Administration, president of Shorebank Chicago Companies, which included Shorebank, the nation’s first community development bank.