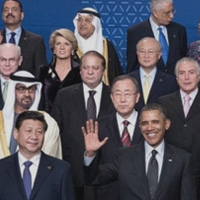 Since President Barack Obama initiated the Nuclear Security Summit process in 2010, leaders from around the world have joined the effort to prevent nuclear terrorism. The process has fostered international cooperation that has delivered tangible improvements to global nuclear security and reduced the threat of nuclear terrorism.

Similarly, the Summit has inspired collaboration across a broader community. Representatives from government, nuclear industry, and civil society have come together to complement the official process. Strengthening nuclear security in an age of globalization requires not only the cooperation of governments, but also concentrated efforts by those outside of government with relevant expertise.

Over the past six years, Carnegie Corporation of New York and MacArthur have invested more than $40 million in grantmaking on civil society research and analysis, as well as multi-stakeholder dialogues focused on securing nuclear materials and reducing the threat they pose. As long-time funders of civil society working on nuclear security, Carnegie Corporation and MacArthur believe there is a continued role for civil society in supporting and advancing strengthened global nuclear security beyond the 2016 Summit. Civil society partners—which include academics, non-governmental experts, industry practitioners, international organizations, and former officials—represent a voice independent of government that can provide context and enhance accountability. They also provide an analytic foundation for effective policies and offer innovative solutions to solve some of our most complex challenges.

Although the Summit process is transitioning away from biennial high-level meetings, there is much more to be done. Just as one way countries pledge their commitments to enhance nuclear security is by providing "gift baskets" to the Summit, these two foundations would like to present a gift basket of their own:

Carnegie Corporation of New York and MacArthur encourage other foundations and individuals to contribute to this agenda.