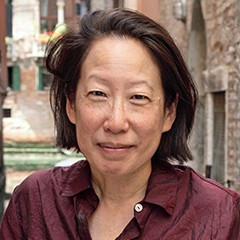 Groundbreaking author and cultural ambassador Gish Jen will join the John D. and Catherine T. MacArthur Foundation Board of Directors later this year.

Gish Jen, the groundbreaking author of The Resisters, Typical American, and Thank You, Mr. Nixon, among other books, has been elected to the John D. and Catherine T. MacArthur Foundation Board of Directors. She will assume her duties later this year.

“Gish is a tremendously creative writer and humanist with multifaceted interests, ranging from artificial intelligence to immigration and baseball,” said Board Chair Dan Huttenlocher. “I am pleased to welcome Gish to our Board, and I look forward to her insights enriching our work.”

Born to Chinese immigrant parents, Jen often addresses the conflicts inherent to the American experience as well as global cultural divides. Both her fiction and nonfiction are known for their depth, breadth, heart, and humor.

“Gish brings essential perspectives as an author, diplomat, academic, and mentor, with lived experience in the Chinese immigrant community in the United States.”

Jen is also an experienced cultural ambassador, having represented the U.S. Department of State in Turkey, Armenia, Japan, China, Egypt, Serbia, and Israel.

“Gish brings essential perspectives as an author, diplomat, academic, and mentor, with lived experience in the Chinese immigrant community in the United States,” said MacArthur President John Palfrey. “Her leadership and ability to bridge communities will strengthen our work.”

Jen graduated from Harvard University. She received her MFA in fiction from the Iowa Writers’ Workshop and holds honorary doctorates from Williams College and Emerson College. Formerly a professor at Brandeis University, Jen has also served as a visiting professor at numerous universities.

Her writing has earned her a Lannan Award for Literature and a Mildred and Harold Strauss Living from the American Academy of Arts and Letters, among other honors; it has been included in The Best American Short Stories four times, including The Best American Short Stories of the Century. Elected a member of the American Academy of Arts and Sciences in 2009, Jen delivered the William E. Massey Sr. Lectures in American Studies at Harvard University in 2012. In 2017, she received a legacy award from the Museum of Chinese in America and in 2019 was named an honorary fellow of the Modern Language Association.

To add to her other accolades, Jen was a 2020 crossword clue in both The New York Times and The Wall Street Journal.

Jen joins eleven other members of the Foundation’s Board of Directors. MacArthur’s Board sets policies and strategy for the Foundation; approves grantmaking areas, initiatives, and grants; and oversees investments and the audit process.