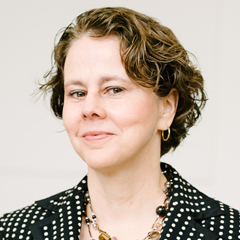 Cecilia Muñoz, Vice President for Public Interest Technology and Local Initiatives at New America, was elected in June to serve on the John D. and Catherine T. MacArthur's Board of Directors. She will join the Board at its September 17, 2019 meeting.

Previously, Muñoz served on President Barack Obama’s senior staff, first as Director of Intergovernmental Affairs then as Director of the Domestic Policy Council. Prior to her governmental work, she was Senior Vice President at the National Council of La Raza (now UNIDOS US), the nation’s largest Hispanic policy and advocacy organization, where she led a policy team and collaborated with a broad range of constituency groups. Muñoz was named a MacArthur Fellow in 2000 for her work on immigration and civil rights.

“Cecilia’s wide-ranging leadership in civil rights, technology and society, and immigration will bring valuable insights to the Foundation,” said Board Chair Dan Huttenlocher.

Muñoz, a Detroit native and the daughter of immigrants from Bolivia, also serves on the boards of the Open Society Foundation, the Kresge Foundation, and the nonprofit Protect Democracy Project. She is a Senior Fellow at Results for America, a nonprofit that advances the use of data and evidence in policy making.

“I look forward to welcoming Cecilia to the Board,” said MacArthur President John Palfrey. “She has been a transformational leader—across government, philanthropic, and advocacy organizations—and a champion of civil rights for citizens and immigrants in the U.S. She will bring a valuable perspective to MacArthur as we advance the Foundation’s mission and live our values.”

Muñoz joins nine other members of the Foundation’s Board of Directors. MacArthur’s Board sets policies and strategy for the Foundation; approves grantmaking areas, initiatives, and grants; and oversees investments and the audit process.