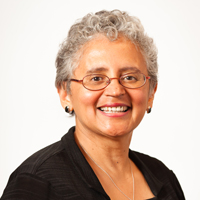 Cecilia Conrad, Vice President for Academic Affairs and Dean of Pomona College, has been selected to serve as the next Director of the MacArthur Fellows Program.  An economist, Dr. Conrad conducts research on economic inequality. At Pomona, she has championed the College’s summer undergraduate research program, led conversations regarding the value and assessment of a liberal arts college education, and worked with academic departments to improve the campus climate for diversity.

Previously, Conrad served as interim Vice President and Dean of the Faculty at Scripps College and Associate Dean of Pomona College.  In 2002, Dr. Conrad was recognized as California’s Carnegie Professor of the Year, a national award that recognizes faculty members for their achievement as undergraduate professors. Prior to joining the faculty at Pomona in 1995, she taught at Duke University and Barnard College, Columbia University.

“I am thrilled that Cecilia will join the Foundation and lead MacArthur’s iconic Fellow’s Program, which recognizes and inspires creativity in all realms of human endeavor,” said MacArthur President Robert Gallucci. “Her record of scholarship, intellectual engagement and rigor, creativity, familiarity with the program, and her warm personal style make her the right person for this important position. I also applaud outgoing Director Dan Socolow, who has led program for nearly half of its history, building its reputation for excellence and creativity.”

Many of us fantasize about receiving a phone call from the MacArthur Foundation... My call did not inform me that I had won a fellowship, but rather an invitation to serve as the director of this unique and exceptional program.

Conrad received her Master’s and Doctorate degrees in economics from Stanford University with a specialization in labor economics, industrial organization, and public finance. She was awarded her Bachelor’s degree from Wellesley College where she was elected to Phi Beta Kappa.

“Many of us fantasize about receiving a phone call from the MacArthur Foundation saying, ‘You have been selected.’  My call did not inform me that I had won a fellowship, but rather an invitation to serve as the director of this unique and exceptional program,” said Conrad. “This is a tremendous honor and a thrill. I am excited, but at the same time a little anxious about following in the footsteps of Dan Socolow who has built the program’s prestige and mystique.  It is also bittersweet to say goodbye to the Pomona College community that has nurtured me for over 16 years.”

Conrad was selected though a national search, after current MacArthur Fellows Director Daniel Socolow decided to leave the position after 15 years. Conrad will start on January 15, 2013.

The MacArthur Fellows Program awards unrestricted fellowships to talented individuals who have shown extraordinary originality and dedication in their creative pursuits and a marked capacity for self-direction. The Fellowship is intended to encourage people of outstanding talent to pursue their own creative, intellectual, and professional inclinations. Recipients may be writers, scientists, artists, social scientists, humanists, teachers, entrepreneurs, or those in other fields, with or without institutional affiliations.They may use their fellowship to advance their expertise, engage in bold new work, or, if they wish, to change fields or alter the direction of their careers.

Although nominees are reviewed for their achievements, the Fellowship is not a reward for past accomplishment, but rather an investment in a person's originality, insight, and potential. Indeed, the purpose of the MacArthur Fellows Program is to enable recipients to exercise their own creative instincts for the benefit of human society. More information about the program is available at www.macfound.org/fellows.