Uncle Remus Finds its Secret Sauce on the South Side
May 2, 2017 | Grantee Stories | Chicago Commitment
Share On Social 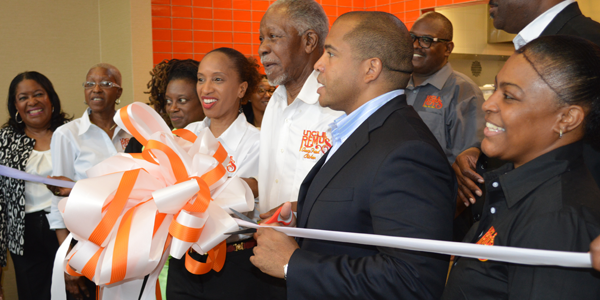 At the busy intersection of 47th Street and Cottage Grove Avenue sits the newest location of Uncle Remus Saucy Fried Chicken, a restaurant that serves up crispy fried chicken with a special secret sauce that its owner is betting will help create a new chicken empire in the Chicago area.

Uncle Remus is a West Side institution. The new location represents its first foray on the South Side, fulfilling a longtime goal of its owner, Charmaine Rickette, who hopes to open franchises throughout the city and suburbs.

Without a loan from the Chicago Community Loan Fund (CCLF), a nonprofit that provides flexible and affordable financing to developments in low- and middle-income Chicagoland neighborhoods, it is unlikely South Siders would be able to enjoy Uncle Remus’s savory sauce without driving west.

Despite owning three locations, Rickette had never taken out a business loan. Like other CCLF borrowers, she did not qualify for financing from larger nonprofits or traditional lenders. CCLF worked with Rickette for months and ultimately arranged a six-year loan to make her dream a reality. She used the loan to hire architects to design the restaurant, build out the leased space and purchase equipment.

CCLF is a MacArthur-supported Community Development Financial Institution (CDFI), private organizations committed to responsible, affordable lending in underserved communities. CCLF helps spur economic development throughout the region, with an emphasis on Chicago’s South and West sides and some suburbs. When MacArthur first invested in CCLF in the early 1990s, CDFIs were still new and unproven. It needed patient, risk-tolerant partners, who were willing to support innovation, provide capital, and help attract additional outside investment.

Over the years, CCLF has loaned $160 million, which in turn has attracted $1.1 billion in additional public and private capital. That capital has enabled CCLF to preserve nearly 8,000 affordable housing units, create more than 2,800 jobs, and develop over 3.1 million square feet of commercial retail and community facility space.

Its loan to Uncle Remus is a big opportunity for the restaurant, which Rickette’s parents, Mary and Gus, founded in 1964. Originally called Royal Chicken, the chicken shack had one refrigerator and one fryer. But the Rickettes’ secret sauce quickly made the store a success.

In 1968, the eatery burnt down during race riots. It took a year, but the couple reopened under the name Uncle Remus, after someone offered them a sign with the name for a discounted price.

Charmaine Rickette grew up around the restaurant but never planned to work there until Mayor Harold Washington died and she lost her job in the mayor’s office of special events. She immediately focused on building the restaurant’s brand. After her brother began serving chicken at a lounge at Halsted and Lake, she realized it had broad appeal.

Rickette trademarked the Uncle Remus name and opened locations in Broadview and inside the city’s first Walmart on the West Side. Yet, she maintained her dream of opening a store on the South Side, even though, it is Harold’s Chicken Shack territory. She gave away free wings at South Side events like the Bud Billiken parade, the African Festival of the Arts and Operation PUSH’s family picnic.

Her efforts paid off when she was approached about opening a location inside the Walmart anchoring the Shops and Lofts at 47. The 53,000-square-foot mixed-use development was envisioned as a project that would catalyze neighborhood growth near Kenwood and Grand Boulevard. The development included national brands like Burger King, but community leaders were looking for something locally-owned.

Rickette wanted a stand-alone store. She convinced Bernita Johnson-Gabriel, former executive director of the Quad Communities Development Corporation and a champion of the project, that Uncle Remus was more than a simple chicken shack and shared her long-term plans to franchise the operation.

But Rickette needed to secure funding to open a new location. With little collateral, it is unlikely Rickette would have secured a traditional bank loan.

“I had no clue how I was going to get that money,” Rickette said before Johnson-Gabriel introduced the Uncle Remus owner to CCLF.

It represented community empowerment and we were confident that the Rickette family would honor their tradition and commitment of hiring the people who live nearby and providing outstanding customer service...

Uncle Remus’ commitment to the local community was one of the qualities that interested CCLF, which was created, in part, to invest in local ventures so community residents could shape their own future.

“It represented community empowerment and we were confident that the Rickette family would honor their tradition and commitment of hiring the people who live nearby and providing outstanding customer service to patrons who are all too often disrespected by merchants,” said CCLF President Calvin Holmes.

Of the roughly 50 Uncle Remus employees spread across its stores, about 60 percent are what Rickette calls “second chancers.” Of those, about half are in leadership positions.

You always want to give your project a little character that is not the same everywhere. This definitely fulfills that need.

Small business lending is not CCLF’s primary role in the marketplace – commercial real estate is – Holmes said. However, CCLF was motivated to assist Uncle Remus because it was a crucial element of the Shops and Lofts at 47.

National chains are desirable to lenders, said Frank Petruziello, president of development for SilkenGold, one of the commercial developers of the Shops and Lofts at 47. “But you always want to give your project a little character that is not the same everywhere. This definitely fulfills that need,” he said of Uncle Remus. “It provides a little richness.”

Since 1991, MacArthur has provided $2.49 million in grants and program-related investments to the Chicago Community Loan Fund, which has enabled 405 loans to support affordable housing and community development projects throughout metropolitan Chicago.