Envisioning Justice, a project of Illinois Humanities, works to address issues in communities impacted by incarceration and contact with the criminal justice system. “On time, always on time,” Akeem Soyan raps in a spontaneous tribute to his mother, be it her attentiveness to the phone bill, to the rent, or to her undying love and support for him.

Riffing on topics from the profound to the silly, Soyan, 22, is among eight young men free-style rapping at a church in Chicago’s Rogers Park neighborhood. The camaraderie is palpable as they laud each other’s nimble vocals and encourage whoever becomes tongue-tied.

The weekly “freestyle circle” is an important part of something much bigger: a project to foster a more inclusive, citywide conversation about how to reimagine the criminal justice system utilizing the arts.

The project, Envisioning Justice, is the work of Illinois Humanities, a nonprofit that encourages dialogue about issues important to democracy. The project’s ultimate goal is shrinking the footprint of the criminal justice system, reducing mass incarceration, and repairing the damage it does to communities.

Reform would entail reducing society’s dependence on policing, jails, courts, and prisons. It also would encourage more solutions driven by those most directly affected – incarcerated and formerly incarcerated people, victims of crime, and residents of neighborhoods most impacted by violence and imprisonment.

Mass incarceration is devastating to some neighborhoods, particularly communities of color. It results in lost income, children separated from parents, and untreated mental health and substance abuse problems. Studies say that, while costly to taxpayers, mass incarceration is ineffective in reducing crime, especially drug crimes, and in preventing future offenses, as evidenced by high recidivism.

The Prison Policy Initiative, a research group, says black Americans are eight times as likely to be incarcerated in Illinois as white people. The National Academies of Science issued a report on “The Growth in incarceration in the United States” that found the U.S. penal population of 2.2 million adults is the largest in the world. In 2012, close to 25 percent of the world’s prisoners were held in American prisons, although the United States accounts for about 5 percent of the world’s population.

The Envisioning Justice initiative is now in its second year and unfolding at an important moment for the city. A new mayor has been elected amid heightened scrutiny of the justice system’s fairness and amid widespread demands for reform in the aftermath of a police officer’s fatal shooting of teenager Laquan McDonald.

“We have only one lens, this binary of guilt or innocence, judging a kid on their one grave mistake.”

State, county, and city officials also have pushed to reduce incarceration, while some pursue other reforms that generally dovetail with the goals of the Envisioning Justice project as part of a “restorative justice” movement.

“The end goal is to keep people out of the system and prevent that first felony conviction, because once that happens we see the revolving door where you can’t get a job, and you most likely will do something that may get you rearrested,” said Emily Cole, supervisor of the Alternative Prosecution and Sentencing Unit for the Cook County State’s Attorney’s office.

The Envisioning Justice dialogue is unfurling at five arts and social service organizations in neighborhoods most affected by police and incarceration as well as through organizations that offer arts programming at the Cook County Jail and Cook County Juvenile Temporary Detention Center. It is relying on local leaders, creativity, and art to surface new ideas, and each of the five “hubs” is collaborating with a professional artist to produce works for an exhibit later this year.

Criminal justice is not necessarily mentioned in the circles at the Rogers Park hub—the church that is home to a grassroots organization called Circles & Ciphers, which strives to foster empowerment, healing, and a sense of community, especially for young people of color. But the discussion is aimed at changing destructive cycles of crime and punishment at the root. The circles are intended to reinforce support for young people and give them ways to express themselves and work out challenges creatively. Other hubs are focused on smoothing the re-entry of incarcerated people back into the community. “We have it completely wrong” with the criminal justice system, said Emmanuel Andre, the executive director of Circles & Ciphers and a defense attorney whose office is a calming oasis of books, candles, and the scent of burning sage.

“We have only one lens, this binary of guilt or innocence, judging a kid on their one grave mistake. And that lens invariably devalues communities of color, the marginalized, the ones who have been pushed out.”

Hip hop is a bedrock of Circles & Ciphers’ work. The freestyle circles include professional “teaching artists,” with no delineation between them and other participants. At one recent circle, young men were encouraged to talk about their feelings about women.

“If you can develop a new system where emotions matter, where people’s past experiences matter, you can definitely start changing some things from the ground up,” said Soyan, who led the circle. 
Circles & Ciphers was created in 2011 by community leaders seeking to address gang violence and other issues. They wanted to connect with young people living at a nearby group home who seemed to be disproportionately involved in neighborhood conflict and crime.

"People see them as the monsters and troublemakers, but we’re creating spaces for them to come in and heal from their personal traumas,” explained AnnMarie Brown, 24, who passed up a corporate job to be the group’s chief operating officer.

Brown found out about Circles & Ciphers through her twin sister, Alicia Brown, who credits it for giving her a “second chance” when her felony record made it hard to get a job. Now they both work there.

“This type of approach helps people stay off the streets and accomplish their goals,” says Alicia Brown, cradling her wide-eyed five-month-old, Kadel. “They believe in you when no one else does.” 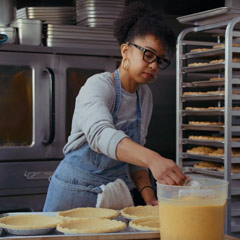