Gun violence shattered Bertha Purnell’s life in 2017, when her son Maurice was shot and killed.

In response, Purnell, a former nurse, channeled her heartbreak into a desire to help others heal. The result was Mothers OnA Mission 28, which supports families who have suffered loss through violence. Its motto is “find your healing community.”

Purnell, a former nurse, channeled her heartbreak into a desire to help others heal after losing a loved one to violence.

The organization is one of 201 grassroots groups in Chicago that received $1.5 million this year from the Partnership for Safe and Peaceful Communities (PSPC), a coalition of more than 50 foundations and funders, to provide safety-building activities on the city’s South and West Sides over the summer, when violence spikes in neighborhoods. PSPC’s Chicago Fund, which launched in 2016 to prepare for the potential spikes, administers the neighborhood grants through The Chicago Community Trust.

Programs offered by the grassroots organizations include gardening, peer mentoring, art, music festivals, community yoga sessions, and youth sports, among others. Since its inception, the Chicago Fund has provided $8.2 million in support of more than 1,000 projects.

In addition to Mothers OnA Mission 28, alt_ (Alt Space) Chicago, and Ujimaa Medics are among the grassroots groups working in the PSPC network. 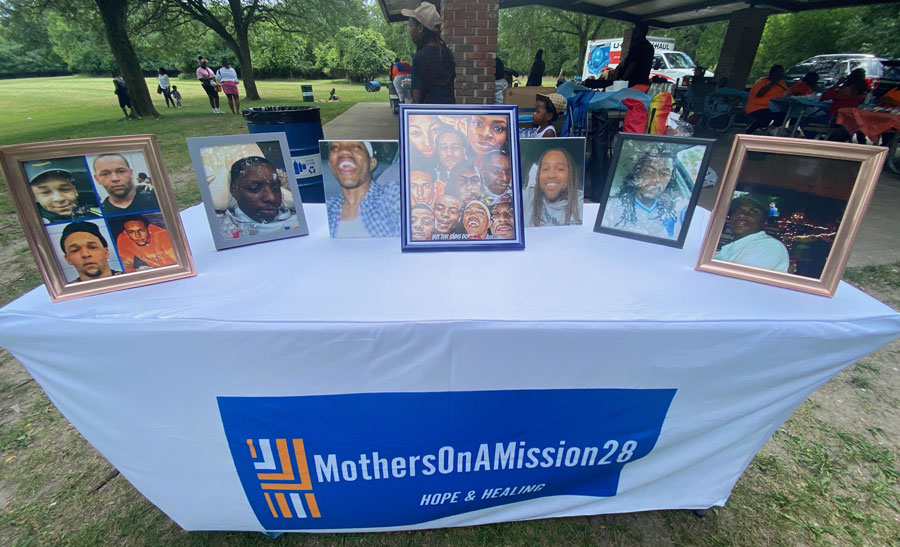 At a Beyond Survivors Picnic in 2022, Mothers OnA Mission 28 displays portraits of people who lost their lives to gun violence.

The goal, Purnell said, is to provide positive outlets for grief-stricken individuals to process and communicate their feelings and struggles—part of a holistic, personal approach that she views as an important investment in the entire community.

“When someone has a stroke,” she said, “you don’t just treat the affected side. You treat the whole body.”

Along with those community efforts, Purnell maintains a plethora of connections to aid families with specialized services they may need in dealing with the loss of a loved one.

While at a 24-hour coffee shop brainstorming ideas on how to curb violence and address trauma in Chicago’s Austin neighborhood, artists Jon Veal and Jordan Campbell came up with the concept of art that serves a dual purpose: problem solving and beautifying.

The conversation led to the creation of an organization that revitalizes neighborhoods through tangible acts of service connected to art and culture.

The organization has embarked on a number of initiatives including alt_ market, a “functional art installation” that uses abandoned spaces as free markets where people can give and take items as needed. alt_ also offers Sunday Service, a volunteer initiative to clean up trash in the Austin neighborhood. Beyond beautifying, Sunday Service provides an alternative narrative of large-scale community service on a day when news outlets tend to report about weekend violence in the neighborhood. 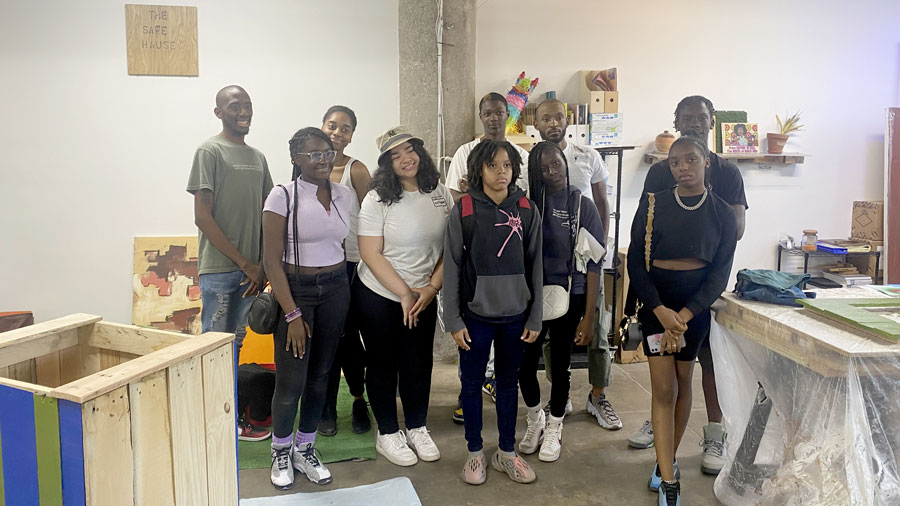 alt_’s Safe and Peaceful Communities’ project is a Redemptive Plastics summer arts camp, where multiple generations collect accumulated plastic trash throughout the Austin neighborhood with the short-term plan of using it to create public seating and other community assets. In addition to that goal, the camp’s longer-term objective is to develop components from the repurposed plastics to build a public playground in the future.

It started with the 2010 shooting of Damian Turner, a youth organizer and co-founder of Fearless Leading By Youth (FLY). Wounded on Chicago’s South Side, he was unable to receive treatment at a nearby hospital because it lacked appropriate trauma services. Turner died while being transported to another medical center.

His death and others under similar circumstances prompted friends Amika Tendaji and Martine Caverl, who worked with Turner in community organizing, to conclude that training residents to provide emergency gunshot care was crucial to saving lives. The two co-founded Ujimaa, which is Swahili for collective work and responsibility.

Ujimaa Medics cofounder Martine Caverl shares her experience being at the scene of a shooting.

The best decisions can be made by people in the community when they are equipped with information and confidence.

Beyond familiarizing participants with emergency first responder gunshot wound care, the workshops offer tips in managing the chaos that often emerges in the moments after a shooting.

At the core of Ujimaa’s approach is the belief that the best decisions can be made by people in the community when they are equipped with information and confidence on how to respond to high stress situations. Beyond the practical skills, the workshops allow people who have experienced powerlessness from gun violence trauma to regain power and control.

“The actual objective of the training,” Caverl said, “is to build a sense of community safety.”

Since 2016, MacArthur has provided nearly $22.4 million in support to PSPC-related efforts, including $1.1 million to Chicago Fund.