Three communities’ stories illustrate how homelessness can be solved by working together, knowing the people experiencing homelessness and their needs, and sustaining the effort long term.

Built for Zero is now a movement of more than 100 U.S. regions committed to measurably and equitably ending homelessness. More than 70 million people live in these communities—about a fifth of the U.S. population. Together, their leaders are building a new reality, where homelessness is rare and brief, if it ever occurs. 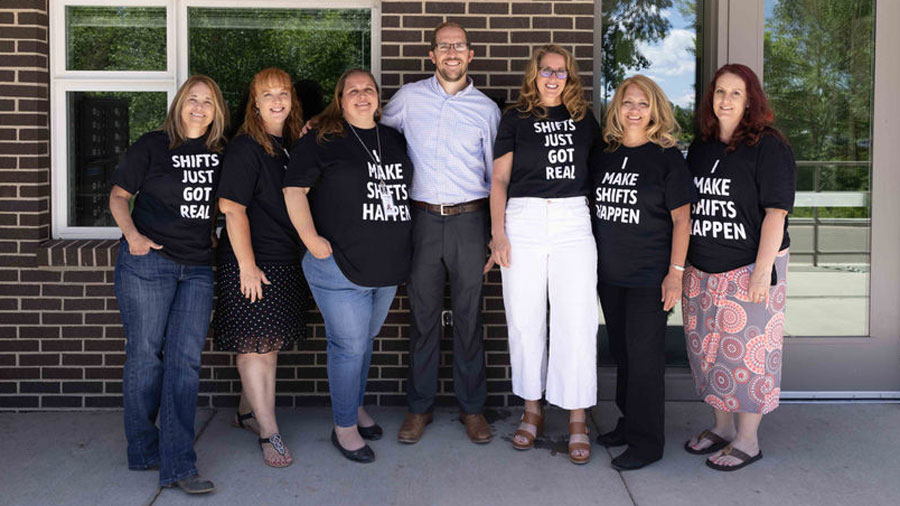 2021 Learnings from the Built for Zero Movement

1 - A shared aim, and a system to support achieving it, were the leading reasons communities reached zero.

In every city and county, there is an array of public agencies and nonprofit organizations working with those experiencing homelessness. We refer to this as the homeless response system. While these groups are often dedicated to providing excellent services for those they touch, they are not necessarily working together or with the goal of reducing overall homelessness across their region.

Individual organizations cannot get a city or county to zero homelessness on their own, but by working together, a consolidated team can. Communities like Fremont County, Colorado are proving it.

Individual organizations cannot get a city or county to zero homelessness on their own, but by working together, a consolidated team can.

DeeDee Clement realized that her county did not really have a system at all. She knew that many looked to her organization, Loaves and Fishes, for leadership on homelessness. And her team did its best, operating an emergency shelter and several housing programs for those who walked through its doors. But they were not organized to end homelessness for everyone in the county.

“It felt as if homelessness was Loaves and Fishes’ problem to solve, and we weren’t solving it,” she said. “I didn’t know what to do.”

In November 2019, she and eight other leaders from Fremont County, Colorado attended a convening of Built for Zero communities from across the country. As she listened to how cities and counties were building systems to reduce homelessness, she saw the path to zero emerge. Just a few weeks later, she hosted a town hall, where she announced that Fremont County was going to end veteran homelessness. But Loaves and Fishes could not do it alone—Clement said that it needed others to join the effort.

Bethany La Loge, who worked for a local mental health and social service agency, was struck by the sense of what was possible.

“As someone on the outside, it hit me like a brick wall,” La Loge said.

La Loge, and many other local organizations, agencies, and volunteers decided to join the local team. And they began to transform their collective efforts into a coordinated system.

An immediate challenge they faced was that there were no paid staff to conduct outreach to those living in unsheltered settings. La Loge and her organization, Starpoint, took the lead on coordinating a volunteer-fueled street outreach team, which included 20 regular volunteers and 30 more on rotation. With guidance from the community’s Built for Zero coach, they developed the first systematic way of conducting comprehensive outreach across their entire region. With a regular line of sight across the entire county, the team identified new veterans experiencing homelessness and added them to their by-name list.

This list became a full, up-to-date picture of veteran homelessness in Fremont County that everyone on the extended team could trust. Built for Zero coaches helped them turn that information into a source for action through a weekly meeting, known as case conferencing. Every week, the local team came together to discuss what each veteran needed to move into housing. When the team realized that one barrier was the lack of a paid staff member to quickly navigate housing options and help veterans move into housing, the local Housing Authority stepped up to create a position to fill that role.

“It doesn’t end at an emergency shelter that provides for basic needs.”

The community came together to deliver what Clement had promised. In February 2021, Fremont County reached functional zero veteran homelessness. Though veterans may experience homelessness in the future, the community now has a system in place for continuously monitoring and quickly resolving any new housing emergencies faced by veterans to assure the experience would always be rare and brief.

“Homelessness no longer lies on the shoulders of Loaves and Fishes alone, and it doesn’t end at an emergency shelter that provides for basic needs,” said Jennifer Jones, the Coordinated Entry System Program Manager. “It became a community problem.” 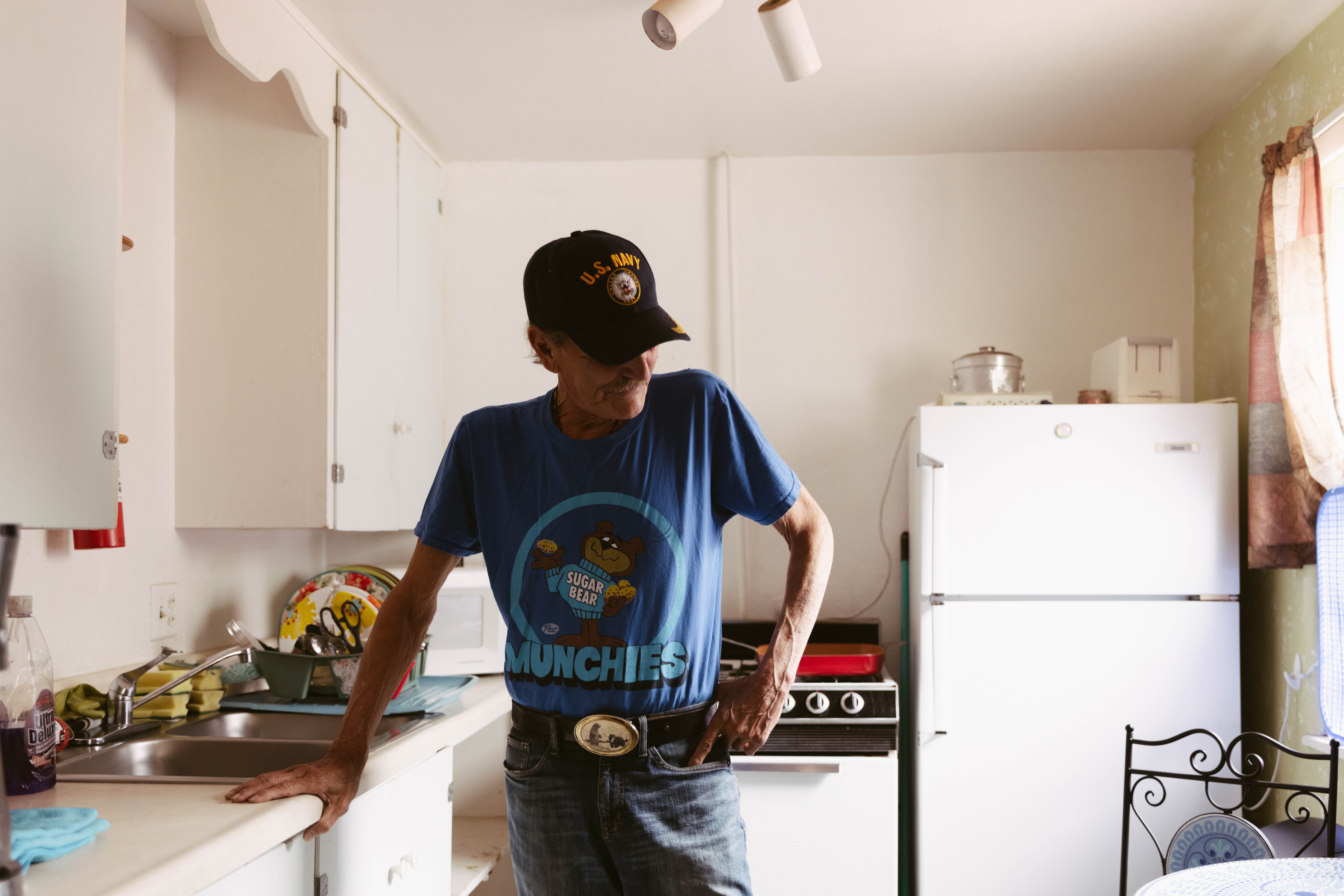 William is a veteran who was housed in Fremont County, Colorado, a community that’s reached functional zero. William in his new apartment in Cañon City.

In the words of one local Built for Zero leader, 2021 was both the best and worst time to work in homelessness.

COVID-19 placed people experiencing homelessness at even greater risk. Yet, an influx of new state and federal emergency COVID-19 resources offered a once-in-a-generation opportunity to put a massive dent in the problem. This included dedicated resources to help people shelter in hotels, pay their rent, and avoid eviction.

“We knew where to find people, and we were able to connect them to rapid rehousing and diversion to get them into housing.”

Despite the availability of these resources, communities throughout the country struggled to apply these funds quickly and strategically. We saw the impact of having coordinated local teams with comprehensive, real-time data in the Built for Zero communities that were prepared to direct new funding to accelerate progress toward zero homelessness.

When Crater Region, Virginia joined Built for Zero, local leaders encouraged organizations working separately to join one team. Together they created a single list of every veteran experiencing homelessness in the community and a system for updating it each month. Every Wednesday, the team gathered on a call to develop a plan for housing every veteran on their list.

“To be on the same page and providing the same information to the community was our first challenge,” said Erica Holmes, Director of Program Operations at St. Joseph’s Villa. “It was a lot of work, but we were able to do it.”

When COVID-19 hit, the challenges multiplied with the transition to remote operations and staffing shortages. But the infusion of emergency federal resources was an opportunity they were ready to seize.

“Since 2017, we have struggled with not having consistent shelter to provide and follow-up,” Holmes said. “The CARES Act allowed us to provide motel and hotel shelter for people, and we were then able to have that direct contact with them to problem-solve and secure permanent housing.”

The systems they built—knowing every veteran by name, having all the right people at the table, and a well coordinated housing process—allowed them to use the new funds to reach zero veteran homelessness.

“We knew where to find people,” Holmes said, “And we were able to connect them to rapid rehousing and diversion to get them into housing.”

An end to homelessness is not a one-time finish line. It is a new standard that must be sustained.

Bakersfield and Kern County, California reached functional zero for chronic homelessness in March 2020 and have maintained it since. 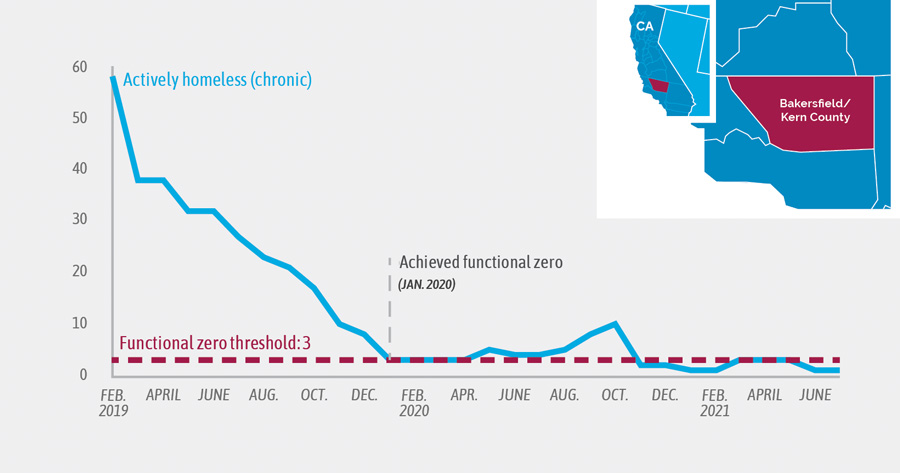 Those who experience chronic, or long-lasting, homelessness are at three to four times greater risk of dying prematurely than the general population and face significant barriers to housing. When Bakersfield and Kern County first set out to end chronic homelessness, more than 200 people needed to be housed.

As of 2020, just three Built for Zero communities had achieved this goal. Bakersfield and Kern County faced a larger chronic population than any of them.

“No one thought it was attainable at the beginning,” said Heather Kimmel, Assistant Executive Director at the Housing Authority.

This did not deter them. The team brought the key nonprofit and government organizations together to create a single by-name list and shifted their approach from each organization serving “my clients” to one community-wide group serving “our clients.” They adopted the spirit of constant improvement, essential for solving complex problems like homelessness. They overcame fear of failure by testing new ideas in short cycles, trying some that did not deliver results, moving quickly to test other strategies, and continually refining their approach until they reached functional zero for chronic homelessness.

“We didn’t ever let the immediate result become the end of the road.”

“You didn’t want to put your name to something that you didn’t think would be successful,” Kimmel said. “And it took us six months to get over the fear. But we eventually got to the mindset that if we succeed, great. If we don’t, we’ll just do something a little different.”

In March 2020, the community first reached functional zero—and the strength of their system was tested almost immediately. The pandemic began, and chronic homelessness also began to rise. But the team continued to employ the same data-driven problem solving and soon drove those numbers back down.

For Bakersfield and Kern County, achieving functional zero was not a fleeting achievement. It was the start of a new normal. Throughout 2021, the number of people experiencing chronic homelessness never exceeded three, even getting all the way down to zero.

“We didn’t ever let the immediate result become the end of the road,” said Dr. Anna Laven, Executive Director of the Bakersfield-Kern Regional Homeless Collaborative.

Fourteen communities in Built for Zero have achieved functional zero. Altogether, six million people live in communities that have ended homelessness for at least one population. 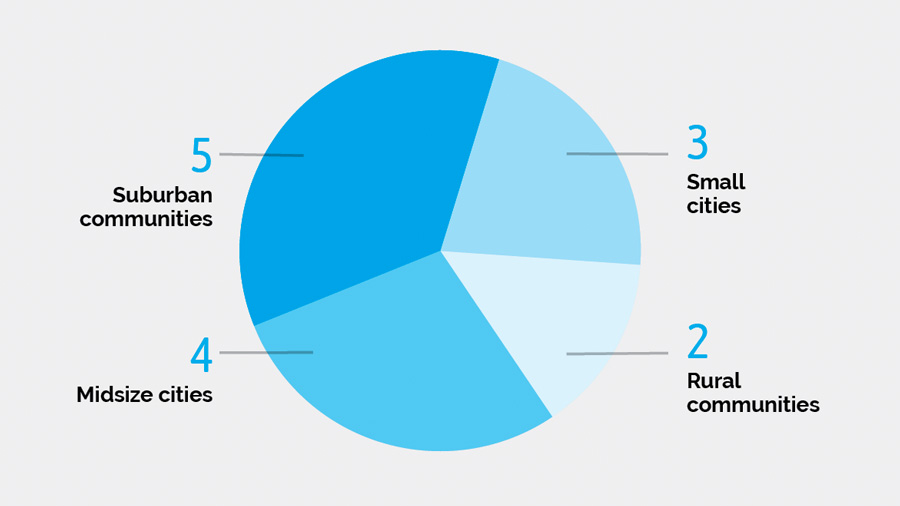 These communities are geographically diverse and include rural and suburban communities, as well as small and midsize cities.

This article was originally published on the Community Solutions website.