The Civic Imagination Project helps communities use storytelling and pop culture to come together across divisive issues.

In Hong Kong, protesters sang from Les Misérables. In the West Bank, they dressed as characters from the film Avatar. In Ferguson, Missouri, they spray-painted slogans from The Hunger Games on walls. And around the world, fans of South Korean K-pop mobilized online to support Black Lives Matter.

Tracking these movements from the University of Southern California (USC), media scholar Henry Jenkins and his research partner Sangita Shresthova watched for years as young protesters drew from music, film, comic books, television games and plays to dramatize their struggles and galvanize campaigns.

Everywhere you look that this generation is conducting politics under pop culture banners.

“You see it again and again, everywhere you look, that this generation is conducting politics under pop culture banners,” said Jenkins, a communications, journalism, and cinematic arts professor and author of 20 books on new media, popular culture, and public life.

Jenkins and his team wondered if ordinary people could use the strategies to bridge difficult political and social differences to imagine a better future. To find out, they formed The Civic Imagination Project (CIP) in 2016 at USC’s Annenberg School for Communication and Journalism.

Their work transformed years of research into workshops, instructional handbooks, tool kits, lesson plans, and other resources for people in diverse communities across the globe to collaborate on divisive issues.

They have helped, among others, high school girls in California working on female empowerment, media makers and community organizers countering extremism in Pakistan, and faith leaders in Arkansas seeking to unite around sanctuary movements for immigrants.

Discussing the Future, Honoring the Past

Workshops take a variety of forms, but all involve heavy doses of storytelling and forcing participants out of their comfort zones.

A 2017 workshop in Bowling Green, Kentucky, brought together a diverse group, including professors and researchers, business entrepreneurs and executives, workforce and community development professionals, tourism representatives, even a journalist and an artisan, to consider the future of work in a state significantly affected by the steep decline of coal mining, tobacco farming and other staple industries.

Through writing exercises and performing skits sometimes featuring fantasy, science fiction, and celebrity heroes, participants tried to reimagine the future of work in the Kentucky of 2040. The goal was to move the conversation to the future, preventing participants from deadlocking over today’s divisions.

Resistance, skepticism, and grim predictions surfaced. One participant even stood to recite a list of jobs automation would erase.

“There was a lot of fear in that room,” Shresthova said. “Just easing some of that fear was a success for us.” 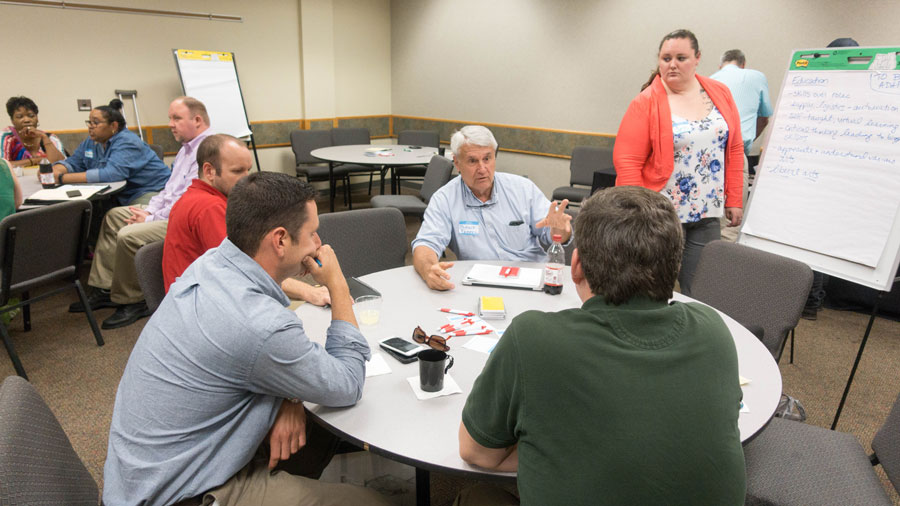 A CIP workshop in Bowling Green, Kentucky, brought together residents affected by the decline of tobacco farming, coal mining and other traditional industries.

They learned, too, that sometimes a discussion of the future must start with honoring the past. They asked participants to share a “memory object” that evoked their family’s work history. One man brought a 1977 Time magazine cover showing a dusty-faced miner, his uncle, and held it beside his own face to show the resemblance.

Sometimes a discussion of the future must start with honoring the past.

To facilitate cooperation, the CIP team partnered with Sam Ford, a consultant to media companies going through transformation and a native Kentuckian. Ford hoped the workshop would establish an enduring collaboration on the future of the state’s economy and workforce.

More than three years later, he and several participants formed a nonprofit called Accelerate Kentucky designed to build consensus on those issues.

“That wouldn’t have happened without this workshop,” Ford said, noting the state’s strong class, culture, and political divisions. “There were people who went in believing they were alone on these issues and, in the end, realized there’s a community here that shares a passion even if they live different lives.”

In the past, people seeking change drew inspiration from folklore, historical figures, fine art, and literature. The U.S. Founding Fathers used Greek and Roman imagery. Civil Rights leaders used the Book of Exodus. The difference today is that popular culture moves at the speed of 10,000 megabits per second, and social media gives everyone, including marginalized communities, a megaphone.

The Civic Imagination Project seeks to scale up by placing its tools into as many hands as possible, posting a wealth of resources online. Those include guides to “worldbuilding,” a technique borrowed from science fiction writers to spur groups to imagine a better future world together. “The world they hope it will be, not the world they fear it will be,” Jenkins said. 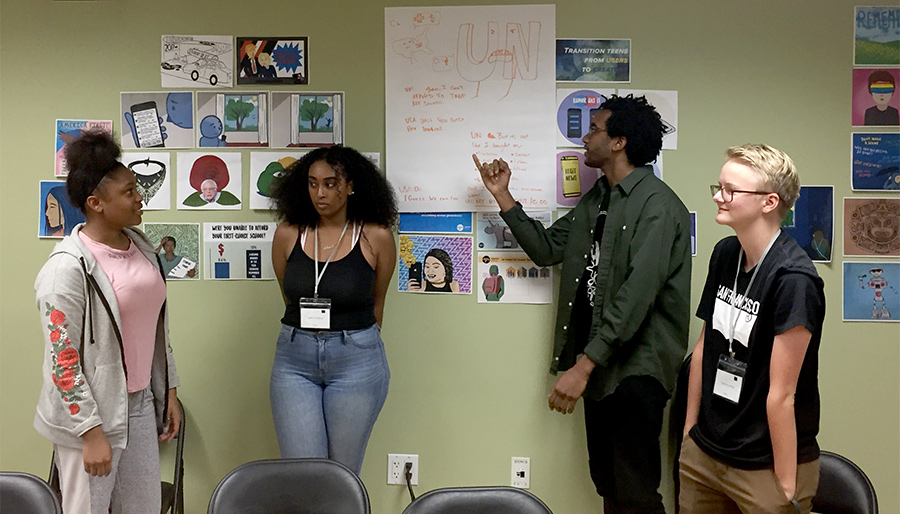 Teenagers in Oakland, California using CIP’s “world-building” method during a workshop to imagine the world of 2060. Photo by Clifford Lee/ YR Media.

Popular culture moves at the speed of 10,000 megabits per second, and social media gives everyone, including marginalized communities, a megaphone.

Groups reaching out to adapt CIP’s work range from the Los Angeles Public Library to a university in Mexico seeking to launch its own research.

“I’m super excited when they just take it and run with it,” said Shresthova.

Their work is especially important following the 2016 election. “For us, the civic refers to the sets of connections citizens feel to each other and the sense of mutual obligation that holds communities together,” Jenkins said. “In the last handful of election cycles, there’s been no healing, and the result is the civic is in fragments.”

The CIP team is looking to extend its reach by setting up shorter engagements in libraries and museums. And they have partnered with some of their former research subjects, including The Harry Potter Alliance. Formed in 2005, the global nonprofit uses themes from the fantasy franchise to engage fans—most of them for the first time—in advocacy on human rights, equality, literacy, and more. 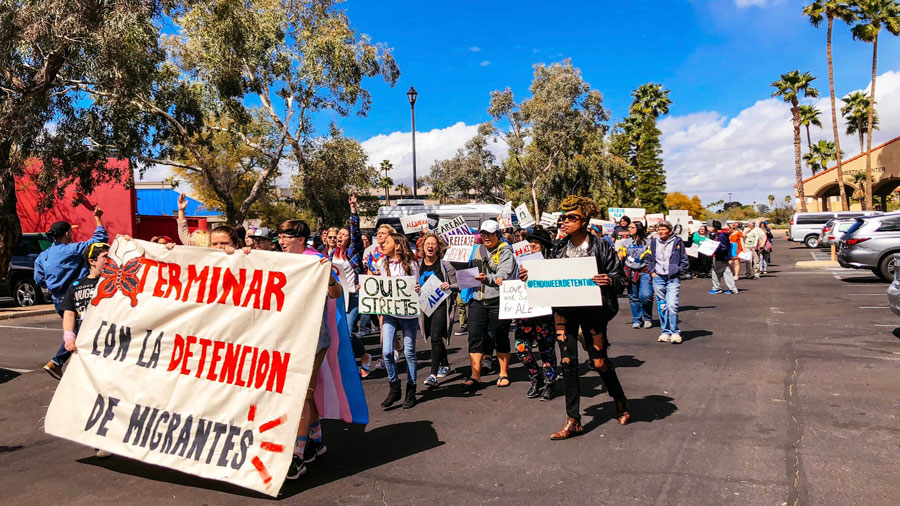 The Harry Potter Alliance took to the streets of Tucson, Arizona to demand the release of an immigrant rights activist held by U.S. Immigration and Customs Enforcement.

Janae Phillips, who develops the group’s curriculum, “Potterized” CIP’s “memory object” technique for two dozen members who gathered online in character to spin tales around objects of meaning and assign them magical properties.

“The Civic Imagination Project is really good at using play to talk about big ideas and open up imagination,” she said. “If we really want to make change, we have to bring more people to the table and to reach people who just need some kind of spark to get them going.”

MacArthur has provided $800,000 of support to the Civic Imagination Project via the University of Southern California since 2016. Learn about working with CIP.