At the height of the Dakota Access Pipeline protests in 2016, security guards with dogs and pepper spray clashed with the Standing Rock Sioux and their allies. Matt Remle realized his fellow objectors needed to target another pipeline: the money pipeline.

Resistance on the ground was forcing delays, costing the company money and spurring a global support movement. But going after banks supplying billions of dollars in loans and financing would be a powerful additional lever—and hold accountable a financial industry that had remained largely in the background.

Mazaska Talks was born. Mazaska means “money” in Lakota, and Remle co-founded the Indigenous group with Rachel Heaton, from the Muckleshoot Tribe of Auburn, Washington. It was 2017. Since then, the organization has been successful targeting financial institutions behind pipelines and other fossil fuel projects.

“Let’s target the real engine behind these projects—and more broadly, the climate crisis.”

“Money talks. These companies, that’s all they care about,” said Remle, a member of the Hunkpapa Lakota with relatives living on North Dakota land marred by the pipeline and dependent on the water supply it threatens. “So, let’s target the real engine behind these projects—and more broadly, the climate crisis.”

The fossil fuel industry has identified groups such as Mazaska Talks, which for decades have been fighting companies polluting Native American reservations and urban communities of color, as the industry’s most serious threat, according to a 2019 report by the engineering and consulting firm Black & Veatch. The reason? The groups’ power to delay new pipeline construction.

Public relations consultants working with fossil fuel companies even talk about protecting clients from getting “standing rocked,” a reference to the rigorous, widespread, and effective resistance to the Dakota Access Pipeline.

Yet barely one percent of global philanthropic dollars dedicated to addressing climate change supports frontline groups, most of which are led by Black or Indigenous activists or other people of color, according to Equation Campaign Executive Director Katie Redford.

“With all of our funding, we’re doing just that,” added Redford, a human rights lawyer who has worked for years on corporate accountability. “We’re investing in the power of the folks on the frontlines for whom the expansion of oil and gas and fossil fuels is a matter of life and death. We need this power to urgently drive the changes that the scientific white papers, PowerPoints, and flip charts have made so clear all these years.”

Keeping Oil and Gas in the Ground

Established in 2020, the Equation Campaign already has steered more than $13 million to more than 50 historically underfunded groups, including Mazaska Talks, which had never received a grant.

Started by two great-great-grandchildren of Standard Oil Co. founder John D. Rockefeller, the Equation Campaign ultimately aims to disburse $100 million over 10 years to frontline groups fighting oil and gas projects. The organization’s name refers to what they consider to be two missing pieces of the equation in addressing climate change—investing in the power of long ignored frontline communities and cutting off fossil fuel supply, rather than simply reducing demand.

With the campaign’s support, the small, Black-led Memphis Community Against Pollution defeated a planned oil pipeline through a southwest section of the city subjected to years of environmental injustice. The company acknowledged choosing the route assuming it would be “the path of least resistance.” 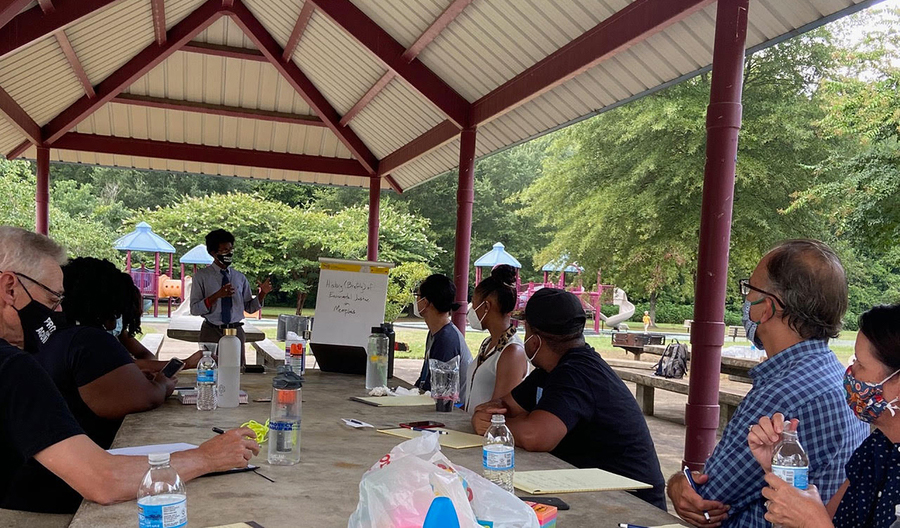 In Texas, the Carrizo/Comecrudo Tribe, aided by the Equation Campaign, forced the cancellation of a major liquified natural gas export terminal at the Port of Brownsville by educating and organizing impacted communities and pressuring financiers to withdraw. The tribe is mobilizing against two other terminals.

“They’re organizing now from a place of power,” Redford said, “because they have one victory under their belts and now, they have their land.”

Other Equation Campaign initiatives include Fossil Free University, a 12-week training course for climate justice activists covering everything from climate science to how to follow the money and expose false solutions. Graduates turned out in force at the 2021 U.N. climate change conference in Glasgow, Scotland.

Fighting for What They Love

Amplifying the power of frontline communities with the most at stake and fighting for what they love is critical, Redford said.

“Amplifying the power of frontline communities with the most at stake and fighting for what they love is critical.”

“Their lived experience is the expertise we need,” she said. “They’ve been fighting the industry for decades on the basis of demands for clean air, clean water, cancer rates, asthma, and sacred grounds. They know how to fight.”

Perhaps no campaign better demonstrates that than Standing Rock. Oil flows through the 1,100-mile Dakota Access Pipeline, though a court-ordered, environmental review is ongoing.

Remle, who lives in Seattle, and Mazaska Talks continue to lead a large-scale divestment movement. They successfully campaigned for the City of Seattle to stop banking with Wells Fargo, one institution financing Dakota Access, when their current contract ends. 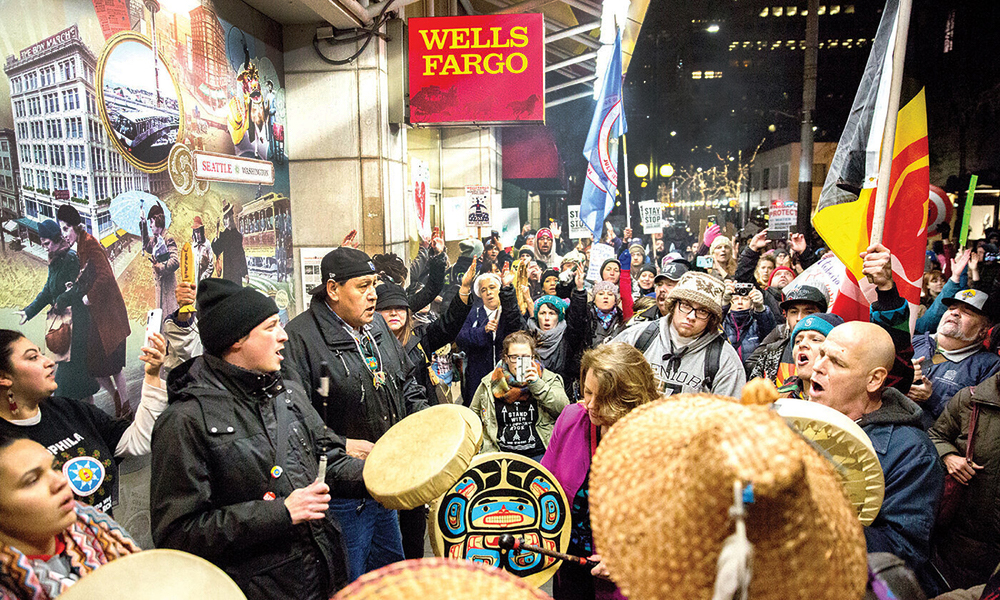 Mazaska Talks' large-scale divestment efforts, including the pictured protest, led the city of Seattle to stop banking with Wells Fargo, which is financing the Dakota Access pipeline.

Mazaska also shared its strategy toolkit with campaigners in Philadelphia, Los Angeles, and other cities, where municipal governments have followed Seattle’s lead, pulling billions from Wells Fargo and other banks.

The strategy is to defeat projects such as Dakota Access, which can lock in millions of metric tons of future emissions, by making the projects risky for investors and driving up borrowing costs.

Other wins for Mazaska include a moratorium on fossil fuel expansion in the Seattle area’s King County, a Green New Deal for Seattle, and—perhaps most noteworthy—a corporate payroll tax that applies to Amazon and Google to pay for the initiative.

Mazaska Talks shared its strategy with other campaigners, who have prompted leaders in Philadelphia, Los Angeles and other cities to pull billions of dollars from financial institutions financing oil and gas projects.

Mazaska had achieved those results on a shoestring budget and without outside funding until Redford offered Equation Campaign support. The funding and general support was streamlined, unlike traditional grants that often require provisions too burdensome for groups like Mazaska.

“We’re going to do this work regardless, but we also have full-time day jobs,” Remle said. “We have families, other obligations. So, to have the extra money coming in helps so much.”

In 2021, MacArthur awarded $1 million in general operating support to the Equation Campaign, a fiscally sponsored project of Rockefeller Philanthropy Advisors.