“Artivists” use Culture and Comedy to Broaden Climate Movement

A comedy special about the climate crisis is a risky endeavor. Hosting it in a city on the frontlines of coastal flooding could have been a recipe for a box office failure.

Yet hundreds of people turned out in late 2019 for “Ain't Your Mama's Heat Wave,” a live stand-up show that brought together comedians of color, activists, and climate experts in Norfolk, Virginia.

“I want to tell you, just a report from these White climate crisis rooms, what they worry about,” comedian Mamoudou N’Diaye told the crowd. He held his hand high and said, “straws,” then lowered his hand and added, “sea turtles.”

The crowd, many from a predominantly Black public housing district especially vulnerable to Norfolk's flooding, storms, and industrial pollution, erupted with laughter. But the evening was about more than laughs.

A preview of “Ain't Your Momma's Heat Wave” gives viewers a glimpse of the show's focus.

The show and a companion “docu-comedy” are the work of Hip Hop Caucus, a group based in Washington, D.C., that uses cultural expression to empower and mobilize marginalized communities of color around social justice causes.

The links between climate justice and racial justice became clear during Hurricane Katrina.

“We were able to turn Black pain into Black joy,” said Antonique Smith, the actor and Grammy-nominated singer who collaborates with Hip Hop Caucus and served as the show's executive producer. “This stuff is very serious, and it's dark, but we can use art and music and comedy to make people feel hopeful, inform them, and energize them to act.”

Formed in 2004 to continue grassroots efforts that had been activated for elections that year, Hip Hop Caucus focuses on four intersecting issues: strengthening democracy; climate change and environmental justice; civil and human rights; and economic justice. Its national staff and local committees lead a network of about 300,000 people that includes experts, entrepreneurs, artists, and entertainers.

In 2018, Hip Hop Caucus launched “Think 100%,” a climate communications and activism platform aimed at challenging environmental injustice, increasing the diversity of the climate movement, and promoting solutions, including a transition to 100 percent renewable energy. Using podcasts, film, music, and activism, “Think 100%” draws young people of color into the movement. It also connects the dots between the climate crisis and injustices placed on racially and economically isolated communities, which are among the most vulnerable to climate catastrophes and illnesses linked to polluting industries.

"If this is a game, put forth your loved ones on the altar of sacrifice of the climate crisis." - @RevYearwood, President & CEO of the @HipHopCaucus. #NoClimateNoDeal pic.twitter.com/ETecS8d2pk

The group’s founder, the Rev. Lennox Yearwood Jr., makes sure the voices of those communities are heard. In his trademark ball caps with messages such as “Frack Is Wack,” he addresses demonstrators with sermon-like intensity across the U.S. and is a frequent guest on panels and at cultural events.

This fall, Yearwood stood with hunger strikers outside the White House, demanding action on climate. He appeared with senators pushing for tougher climate legislation at the Capitol and rallied young demonstrators at the U.N. climate summit in Glasgow—at one point, climbing atop a phone booth and shouting, “All power to the people.”

For Yearwood, a U.S. Air Force veteran and prominent influencer in hip hop political life, the links between climate justice and racial justice became clear during Hurricane Katrina. “I witnessed, literally, my family and friends drown in the richest country in the world,” he said. “That led me to begin to move the organization in this direction.”

From Activists to “Artivists”

The group’s successes include helping stop a planned oil pipeline in July 2021 that would have run through predominantly Black South Memphis. The caucus is also pressuring public relations and advertising firms to stop working for fossil fuel companies, has helped lead an accelerating divestment movement, and produced and supported climate movement events across the country and in Cape Town, South Africa.

In addition, Hip Hop Caucus is spreading awareness through major artistic projects, including HOME (Heal Our Mother Earth), a 2014 album featuring songs by Common, Antonique Smith, and others. 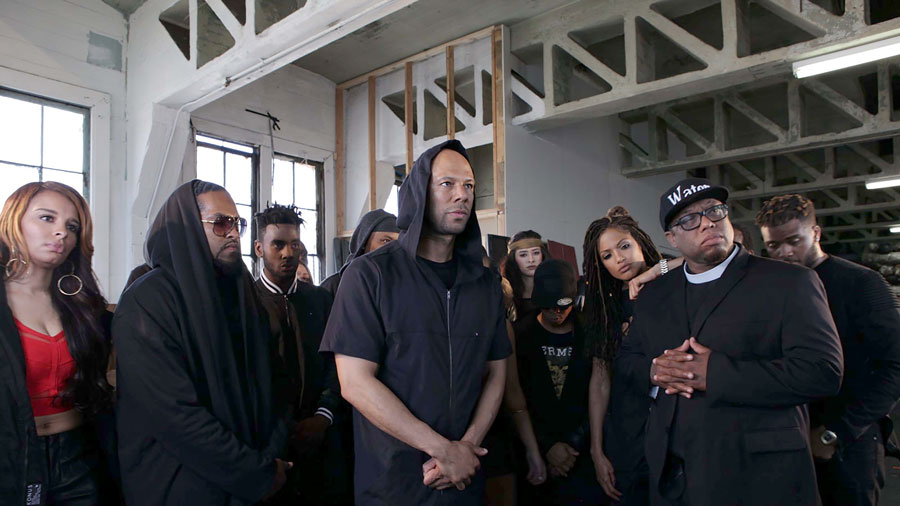 Members of the Hip Hop Caucus pose with artists featured in the music video “Trouble in the Water,” a feature single from the album HOME (Heal Our Mother Earth), in 2016 in Los Angeles.

HOME was downloaded more than 60,000 times in the first week of its release, and Smith’s rendition of Marvin Gaye’s “Mercy Mercy Me” has become an anthem in the climate movement, leading her and others to call themselves “artivists.”

The group’s award-winning podcast, “The Coolest Show,” is an influential platform for young activists of color to discuss environmental justice topics that the climate movement overlooks, including its exclusion of people of color.

A recent episode featured two young activists from Youth vs. Apocalypse, an organization based in Oakland, California that has adopted tactics similar to those the Hip Hop Caucus pioneered.

The conversation highlighted connections between the climate crisis and systems of oppression, the difficulty Black-led groups face in attracting funding, and a climate movement late in discussing environmental justice for communities of color.

“I like being a data translator and giving community members the knowledge they need.”

One of the guests, Youth vs. Apocalypse co-founder Isha Clarke, said the show was “a breath of fresh air” in a movement she once thought was only “a bunch of old White people” who approached activism as if it were a hobby.

“This ain’t a hobby,” Clarke said, emphasizing the urgency activists of color from frontline communities feel. “This is about our lives.”

After presenting “Ain’t Your Momma’s Heat Wave,” Hip Hop Caucus discovered that—before the comedy special—many people in Norfolk had not connected their flooding and pollution struggles to climate change.

“I like being a data translator and giving community members the knowledge they need to have a conversation with their neighbor or a local politician on climate change,” she said. “That’s a win to me.”

In the years ahead, Yearwood said his goals include continued development of “a leaderful organization and movement with many women at the forefront.” And a new documentary is in the works with help from dream hampton, an award-winning filmmaker. Called “Underwater Projects,” it will follow the redevelopment of Norfolk’s public housing community in the name of climate adaptation.

“We’re going to stay busy,” Yearwood said with a laugh.

In 2021, MacArthur supported the Hip Hop Caucus Education Fund with $500,000 over two years for general operations of the organization and all its activities related to cultural communications work.