MacArthur commissioned Dorian Sylvain to install artwork on the theme of Black Lives Matter in the Marquette Building.

As part of our larger efforts to meet the moment, we sought to commission a Chicago-based African American artist to produce a Black Lives Matter mural for public display in the windows of the Marquette Building, which is owned and operated by MacArthur.

Over several months, staff collaborated with the South Side Community Art Center (SSCAC), a Culture, Equity, and the Arts grantee through our partnership with the Richard H. Driehaus Foundation. Named a "National Treasure" by the National Trust for Historic Preservation, SSCAC opened in 1940 and is the only remaining community art center that was established by the Works Progress Administration. As such, it has served as an important talent incubator, sacred space, and community gathering spot for African Americans in Chicago and beyond since its opening eight decades ago. By commissioning an artist in collaboration with SSCAC, we aim to highlight its leading role in advancing Black artistic talent in Chicago while also directly supporting a Black artist.

We worked closely with SSCAC to identify and commission Dorian Sylvain, a well-known local muralist and public artist who works to expose children and communities to art-making. Sylvain worked with assistance from Chicago-based designer Norman Teague to produce and install a six-panel mural. The piece contains several symbolic references to the history of African American protest, from women’s suffragists, to Ida B. Wells, the 1968 Olympics Black Power salute, and a kneeling figure of Colin Kaepernick. We expect the installation will be temporary. It will, however, be part of the Foundation’s permanent collection and can potentially travel to SSCAC for display in the community.

“Art has historically been a reflection of any moment in time: it tells a story; it records the hopes and dreams of the artist, and in many ways, it offers us a snapshot of where we are in history,” said Monique Brinkman-Hill, Executive Director of SSCAC. “Art also captures what the artist visualizes through their own creative lenses. Today, in the midst of a pandemic, we find ourselves still grappling with the importance of why Black Lives Matter, particularly after the tragic deaths of so many Black men and women.”

The artist Dorian Sylvain commented on her piece, her artistic vision, and what it represents to her: 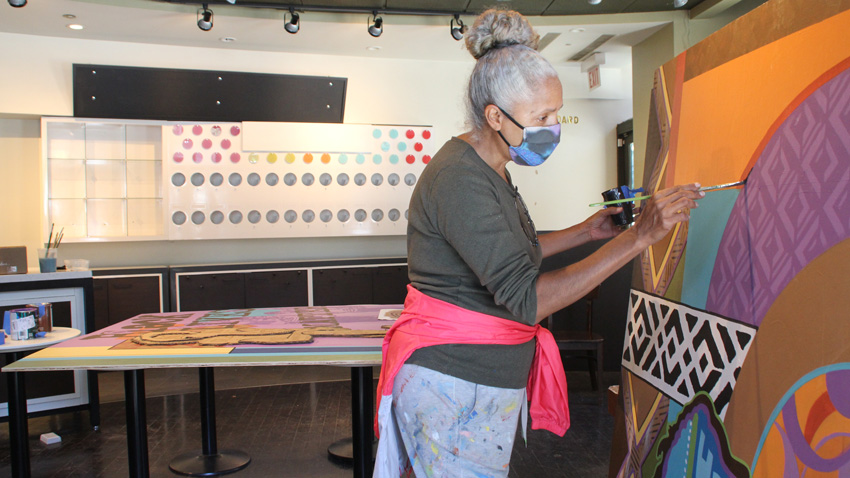 “Being raised in this city, and raising three Black boys in this city, it has been my experience that a lot of the issues that my parents talked about in the 1960s are the same issues we’re talking about 60 years later. The talk that black parents have to have with their children, it’s about survival. We’re trying to give our children a toolbox on how to maneuver here in the world.” 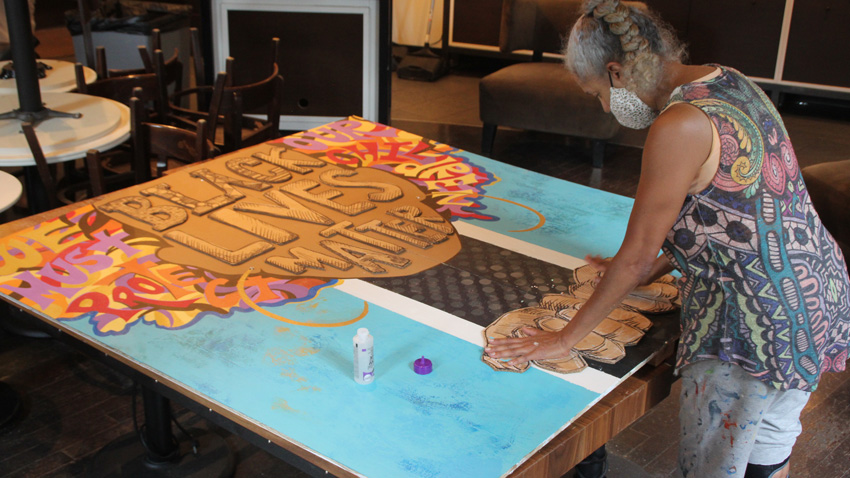 “So, with these pieces, I wanted to look back at the art of the 1960s. What was the expression? I was drawn to the wall of respect by the AfriCOBRA group (founded by Barbara Jones-Hogu and others), and I felt that that would be an appropriate artistic sensibility.” “My work has always been focused on Afrocentric symbolism, so I wanted it to be colorful, speak to the color theories of AfriCOBRA that have been so iconically marked in Black neighborhoods. Common, everyday Black culture. Positive imagery and positive words.”

“The value of public art is that we want it to be out there, seen and consumed. At its core, it is Black art by and for the people and about loving Blackness. I wanted it to be uplifting and serious, yet still speaking to the importance of color in the Black aesthetic.” 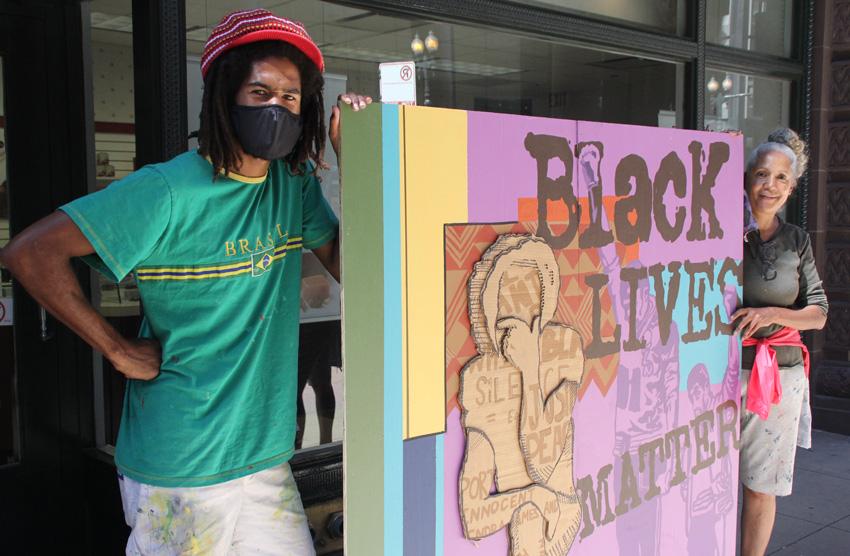 “The other fascination that I had is the idea of athletes and protest signs. Colin Kaepernick was created out of corrugated cardboard. And the first people that popped in my mind when I think of protest are Tommie Smith and John Carlos at the 1968 Olympics in Mexico. When I think of an iconic moment that’s captured in a photo, that memory is etched in my mind.” 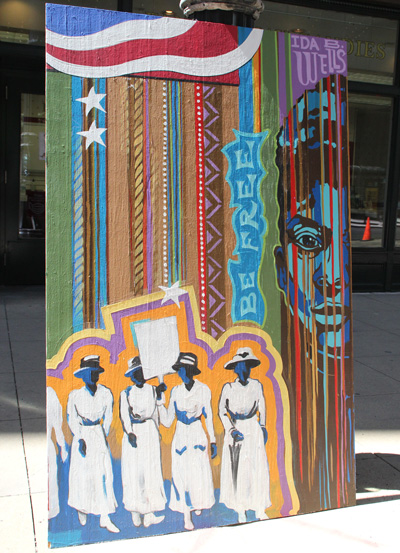 “I also see a thread connecting Ida B. Wells to the women that began Black Lives Matter. This has been a continuum and a conversation that has yet to go away.” 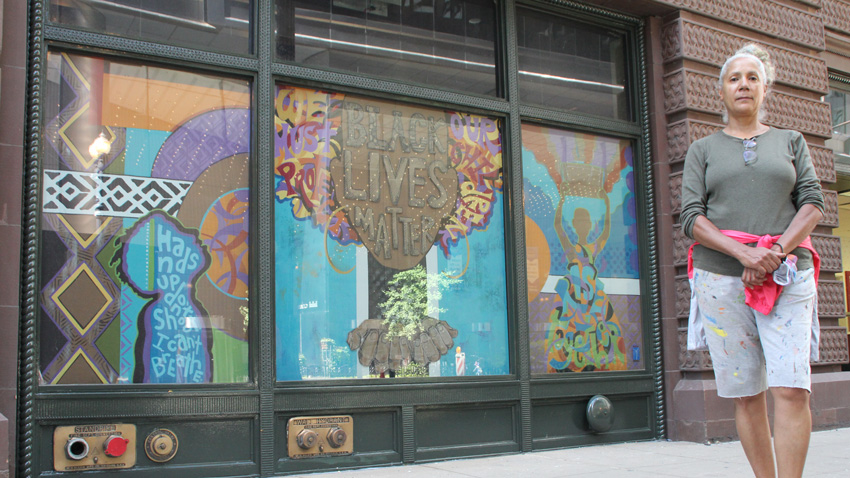 “I thought of using jewels instead of diamonds to represent the idea of how precious these Black lives have been. Over the past 100 years, we’re just talking about a lot of souls. We have to continue to justify our value, it’s just crazy that we still have to have this conversation.”