To highlight the history and legacy of Chicago’s 1919 race riots, The Newberry Library coordinated a series of public programming throughout the city.

Girija Gullapalli does not assume anymore that her friends are aware of Chicago’s continuing segregation and racial divides nor how deeply those divisions are rooted in the city’s past. 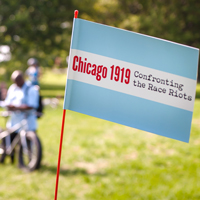 The speech pathologist from Chicago’s western suburbs discovered how much she did not know on a bike ride through Bronzeville. The tour was part of a season’s worth of educational events drawing attention to a largely forgotten chapter of the city’s history—the race riots of 1919.

A century later, Gullapalli, 50, joined dozens of others on a rolling tour of landmarks from the deadly unrest that established many of the lines that still divide the city. And in the concentrations of disinvestment and vacant lots on the South Side, she saw up close the legacies of that violence.

Gullapalli says she was surprised she had never heard of the riots, and she is more likely to raise the topic now among people she knows.

“It made me wonder what else we don’t teach the kids,” she said. “I think they need to teach this information to younger and younger kids, so they develop an interest in social justice as early as possible.”

The bike tour was one leg of “Chicago 1919: Confronting the Race Riots,” a year-long educational initiative and series of “community conversations” sponsored by the Newberry Library and 13 other cultural institutions, including the Chicago History Museum, the DuSable Museum of African American History, Young Chicago Authors and Kartemquin Films.

The programming has included discussion panels, readings, and film screenings aimed at widening awareness of the events and their legacy in a city known as one of the most segregated in the country. It was funded by the National Endowment of the Humanities. 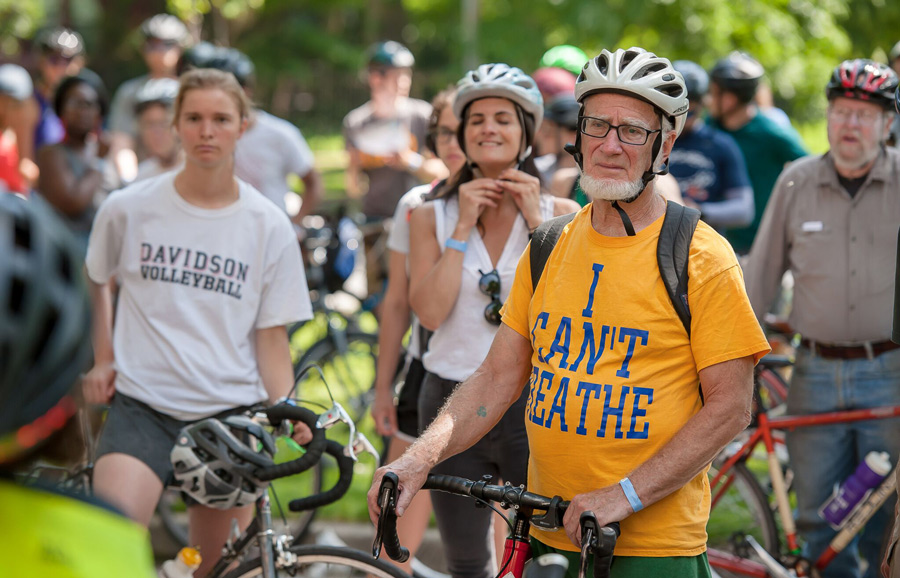 Brad Hunt, Vice President for Research and Academic Programs at the Newberry, helped devise and coordinate the programming with the partner organizations. He said he never tired of the “a-ha!” moments, when audiences could see how inequality has been created and reinforced over the decades.

“I think we’ve already changed the conversation in the city,” Hunt said.

“It’s not hard to draw a line from Eugene Williams to Laquan McDonald.”

He believes the larger impact of the series will be how it brought people together around something once so divisive. And it was important, he said, to draw parallels between 1919 and current events, such as the protests and reform demands that followed the fatal police shooting of black teenager Laquan McDonald in 2014.

“We don’t talk about the riots enough—and we need to...because it’s not hard to draw a line from Eugene Williams to Laquan McDonald,” Hunt said.

Eugene Williams was an African-American teenager who drowned in Lake Michigan on July 27, 1919, after being stoned by a white man. He was attacked after floating over an invisible color line separating supposed white and black sections of a beach near 29th Street. 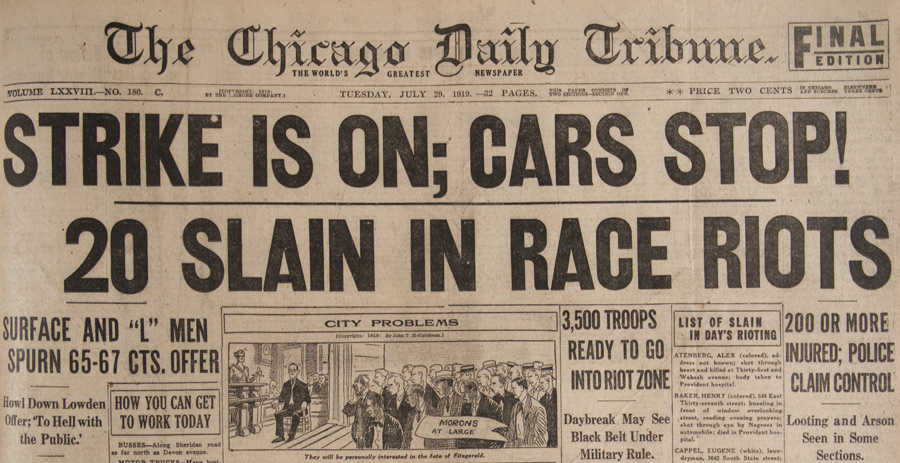 The incident ignited clashes that turned into one of the most violent episodes in Chicago history, and the National Guard was deployed. Thousands of black and white Chicagoans fought each other in the streets, resulting in 38 deaths and over 500 injuries, mostly to African-Americans.

The forces that sparked the racial tension were not limited to Chicago. The violence erupted during what became known as the “Red Summer” across the country as a result of racism, residential segregation, anti-communism, and labor conflict.

The riots exposed growing racial tensions after a first wave of African-Americans came north in the Great Migration, seeking employment. The return of soldiers from World War I fed tensions as black and white people competed for jobs. 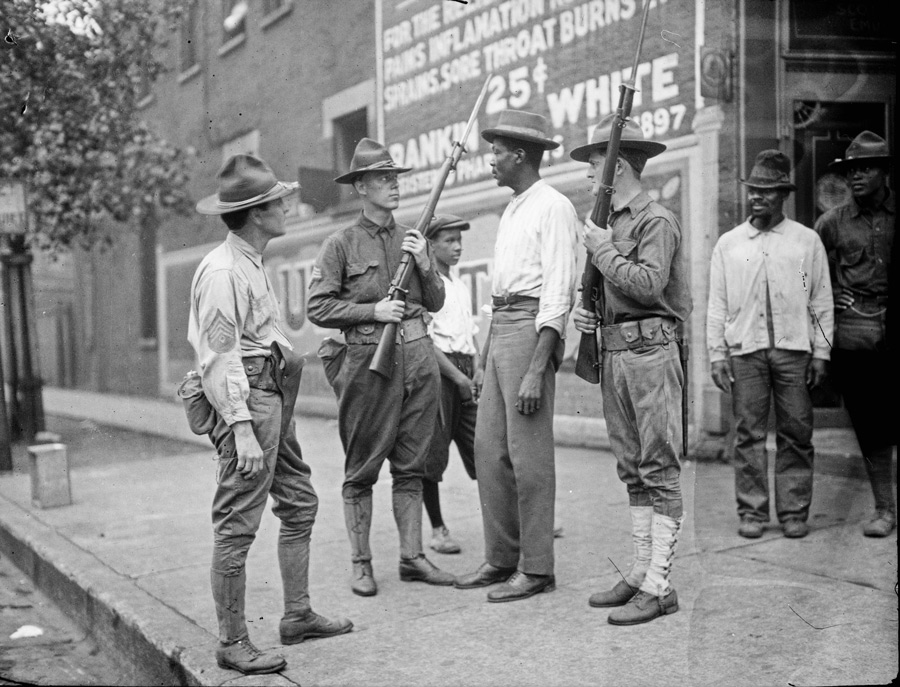 A report produced by the Chicago Commission on Race Relations after the riots documented how ingrained and systemic racism had become, with discriminatory housing, criminal justice, and economics resulting in second class citizenship for African-Americans. But the 1922 report’s recommendations were weak and mostly ignored.

“The history of people of color typically gets brushed over. Things will only change through education.”

A century later, the city is still grappling with the racism that only deepened across the city, as racially restrictive housing covenants were imposed against black and Jewish people. By the 1950s, segregation was reinforced by “blockbusting,” where real estate agents stirred racial fears to coerce white homeowners to sell their property and move, and predatory “contract buying,” where black families were forced to purchase unreliable property contracts because they had no access to banks and mortgages. “Red-lining,” where government maps deemed some neighborhoods less credit worthy based on their racial composition, made matters worse.

The Newberry-organized events addressing that legacy included a spoken word performance by a dozen teenagers from Young Chicago Authors at the Harold Washington Library Center, where the message of “never forget” and the image of unarmed black men were front and center.

One student after another took to the stage to share reflections on historical events and growing up as a person of color in an increasingly tense world. The students prepared their reflections after visiting the Newberry to research original materials about the riots. 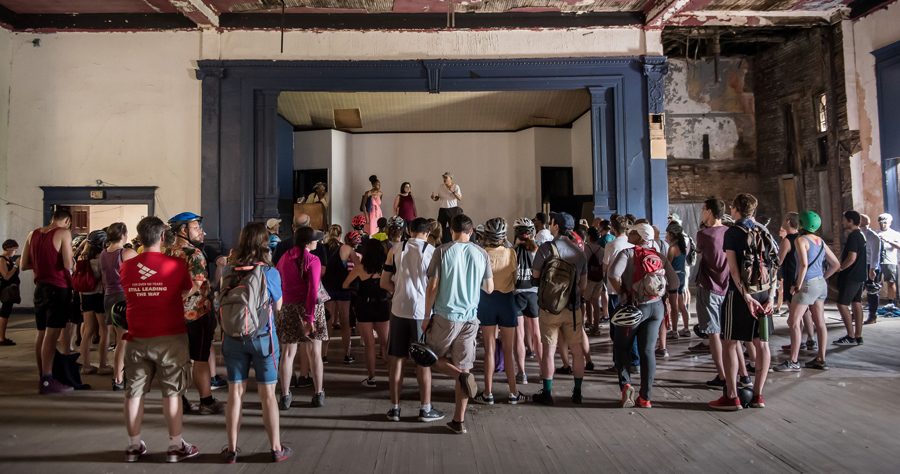 Jonquil McCray, a senior at Crane High School, said that even though she attended Chicago Public Schools her entire life, she had never heard of Williams and the 1919 riots—until this year.

“The history of people of color typically gets brushed over,” she said. “Things will only change through education..., and when we can finally look at each other and see our shared humanity—not color.”

The 10-mile bike tour started at Margaret Burroughs Beach near 31st Street. It then wended its way through Bronzeville, Bridgeport, and the Stockyard Gate, stopping at each site of significance, where speakers helped fill in the story of the unrest.

Gullapalli said she was particularly impressed by the beautiful brownstones standing next to vacant lots. From the speakers, she was surprised to learn that two-thirds of the 520 riot victims were African Americans as were two-thirds of the 138 people indicted for crimes. She also noted how black people had been beaten as they left their factory jobs. She also was pleased to learn for the first time about Ida B. Wells, the renowned journalist and civil rights campaigner who wrote about the riots and deteriorating race relations that preceded it.

Also on the bike tour was Mike Torney, a retired government teacher from York High School in suburban Elmhurst, who took his students on similar bike tours to the South Side a decade ago. Together, they launched a campaign at that time to draw attention to the 1919 events, even placing a memorial to Williams on a boulder near the lakefront on the riots' 90th anniversary. 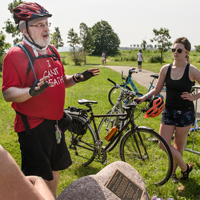 That effort—including petitions and letters to the editor—ended in frustration that little else appeared to result from it. That is why the significant turnout for the Newberry programming this year has been so gratifying, Torney said.

“This year was a revelation to me,” he said. “So many people did care and did get involved that it brought tears of joy to me seeing that Eugene Williams would no longer be lost for eternity in obscurity.”