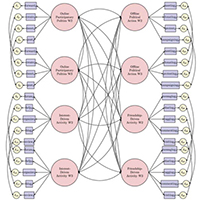 A study of the political significance of social networks concludes that participation in large networks on social media makes young people more likely to engage politically. Though they may be using social media primarily for non-political purposes, social networks give young people the tools to express and learn about political ideas and to facilitate participation and political mobilization—both online and in person. The Youth and Participatory Politics survey, supported by MacArthur, looked at the same group in 2013 and 2015 and found that friendship-driven activity in online networks led especially to increased online political activities, while interest-driven network participation led to more offline political activity, including donations, events, and protests.