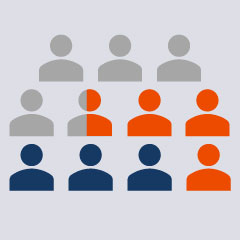 A report on Cook County’s 2017 decision to reform bail practices found it did not change crime rates in the city. Reducing monetary bail is a common, but under-studied, strategy for reducing pretrial jailing, and the report showed more than 500 additional people were able to return to the community to await trial in the 6 months after the reform took place. The report, by grantee Loyola University with support from the Institute for State and Local Governance, also calls attention to the need for more study on the use of bail.