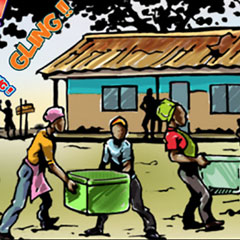 The Home Grown School Feeding Program (HGSFP) in Nigeria received funding from recovered stolen assets, and has had numerous follow on benefits from the social investment, according to a case study documentary video on the Presidential Advisory Committee Against Corruption. Recovered assets were used to feed every child in primary school in levels one through three, while State governments were responsible for levels four through six. In the process, HGSFP has employed over 170,000 cooks, strengthened agricultural production chains, and kept an additional 10.4 million students in schools. Ninety-seven percent of the cooks employed by the program were women, which had the additional impact of building more financial independence for the women and their families, like the story of a cook told in a comic strip that pairs with the study.

MacArthur grantee Presidential Advisory Committee Against Corruption advised the government on the recovered assets, whistleblower policies, and anti-corruption strategies, including recommitting assets to social investment like HGSFP. The downstream impacts of the program demonstrate how addressing corruption at a high level and shifting norms can improve lives for a wide range of people. The case study shares learnings that emphasize the broad coalition and strategic approach that made the HGSFP successful.