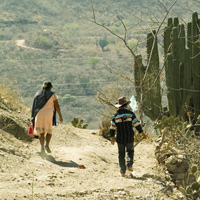 The Fundación por la Justicia (“Foundation for Justice”), a MacArthur grantee, and Mexico’s Attorney General have signed an agreement to create a Forensic Commission to investigate the mass murders of migrants in Northern Mexico. The Commission was created in response to several mass killings of migrants from 2010-2012. To date, no one has been charged for these crimes and advocates and families of the victims have been denied access to information about the pending investigations. Each year, an estimated 140,000 Central American migrants transit through Mexico on their way to the United States and are increasingly subjected to crime and human rights abuses due to Mexico’s deteriorating security environment, lack of coordination among migration and security authorities, and lack of supervision over local security agencies. The commission is intended to help establish protections for undocumented individuals and legal mechanisms in Mexico and the region to help victims and their families obtain redress, justice, and reliable information about ongoing criminal investigations.