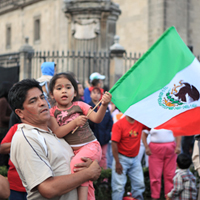 Sin Fronteras, recipient of the MacArthur Award for Creative and Effective Institutions, has helped to win Mexican citizenship for 14 individuals whose cases were plagued with undue delays and obstruction resulting from corrupt and unfair practices by the Mexican government. Sin Fronteras introduced a lawsuit on behalf of 16 individuals in an effort to counter and raise awareness of the country’s practice of providing selective, expedited citizenship to certain “classes” of foreigners, such as artists and soccer players, while denying access to other groups. The court found that in 14 out of the 16 cases, denial of citizenship was inconsistent with the law.