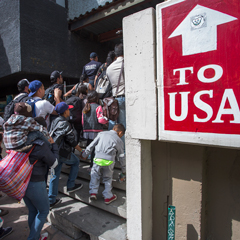 In January 2017 President Trump announced dramatic shifts in federal immigration policies and made sweeping changes to immigration law enforcement. These new executive orders affected Chicagoans, immigrant communities, and organizations working in this field. By May 2017, recognizing the importance of this work to the city, its diverse communities, and all its residents, MacArthur awarded $1.2 million (eight expedited grants and five traditional grants) to 13 organizations supporting efforts to overturn laws and policies that undermine people's rights and to protect the rights and liberties of racial, ethnic, religious, and other social groups.

In October 2017, the Foundation hired The Silver Line to conduct an evaluation of the package of grants made in response to President Trump's executive orders on immigration. The purpose of the evaluation was to help the Foundation understand the value and perceived benefit of the grants for the recipients and the communities they serve and assess the potential for applying this mode of targeted and responsive grantmaking in the future. The primary questions guiding this evaluation included: