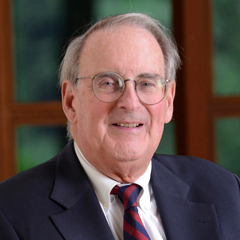 Jonathan F. Fanton, former President of New School University, served as MacArthur’s President from 1999 to 2009. He deepened investment in some of the Foundation’s most promising areas of work, including human rights and international justice, juvenile justice, affordable housing, and community and economic development. He sought out and supported major new ideas, such as the Encyclopedia of Life and the Law and Neuroscience Project, and emphasized fewer grants but for larger amounts and longer periods of time to increase the impact of MacArthur’s grantmaking. In conjunction with this conversation, he noted that he is grateful to Mary Page for her leadership of MacArthur’s human rights and international justice work for 20 years; he deeply values his partnership with her.

Why did you make international justice a defining issue for the Foundation during your tenure?

MacArthur had established itself as a leading human rights donor and international grantmaker. International human rights groups were becoming more professional and influential. The evolution of human rights norms was impressive, but perpetrators’ impunity persisted. The genocides in Rwanda and Former Yugoslavia had shocked the conscience of the world, and the global community had begun to demonstrate openness to international cooperation to counter impunity. This included the establishment of the Yugoslav and Rwandan criminal tribunals; the extradition from the UK back to Chile of Augusto Pinochet to stand trial for torture; and the growing use of regional human rights courts and commissions. We saw the need for an international justice system to standardize and develop legal doctrine and to hold perpetrators to account for their actions. MacArthur took advantage of this moment to use flexible funding for planning and development of the International Criminal Court (ICC) and the Responsibility to Protect norm.

This dovetailed with MacArthur’s support of international human rights organizations; its programs to enhance human rights law in country programs in Russia, Nigeria, and Mexico; and its abiding interest in international peace and security. There were synergies among these programs.

What is the International Criminal Court? Why is it so critical for the success of an international system of justice?
The ICC is an independent court established by the Rome Statute, which entered into force on July 1, 2002. It is headquartered in The Hague and has jurisdiction over the most serious international crimes: genocide, war crimes, crimes against humanity, and the crime of aggression. Currently, the Court is pursuing 11 investigations and 25 cases, and there are four ongoing trials. There have been nine convictions and one acquittal; 15 suspects remain at large. Some 14,000 victims have participated in the proceedings.

The Court, unlike previous tribunals, is permanent. It is a court of last resort, with jurisdiction only when national courts cannot or will not act. The principle of complementarity laid out in the Rome Statute recognizes that a state has the first right and responsibility to investigate crimes committed on its soil. To fulfil this obligation, increasing numbers of states that are parties to the treaty have developed constitutional and legal means to address international crimes defined in the Statute and cooperate with the Court. To date, of the 123 countries that have ratified the Rome Statute, over half have initiated legislation to this end. The bodies of law that are being built through ongoing national, regional, and ICC prosecutions are slowly reshaping the legal landscape.

How was the Responsibility to Protect developed and why?
In the wake of the atrocities in Rwanda and the former Yugoslavia, questions arose about how and when the international community has the right to intervene in a country when citizens’ rights are grossly and systematically violated. UN Secretary General Kofi Annan called on the General Assembly to find consensus around the thorny issue.

The government of Canada, led by Minister of Foreign Affairs Lloyd Axworthy (who later served on MacArthur’s Board), answered the challenge with the establishment of an independent Commission on Intervention and State Sovereignty. Canada was joined by several U.S. foundations, spearheaded by MacArthur, to provide the resources for the Commission and its research, which culminated in the 2001 report, The Responsibility to Protect. The Report posited that, while a state has a right to control its affairs, it also has the responsibility to protect people within its borders. When a State is unable or unwilling to fulfil its protection mandate, the responsibility shifts to the international community to 1) prevent genocide, war crimes, and crimes against humanity; 2) react when civilians are under threat of these crimes; and 3) rebuild conflict-ridden societies. The Report was endorsed by the UN General Assembly in 2005, reaffirmed by the UN Security Council in 2006, and acknowledged by a UN resolution in 2009. The norm provides a framework for an enforcement mechanism in an international justice system in cases where states and or the UN Security Council fail to act.

What impact did the Foundation’s grantmaking and the work of its grantees have in the field?
Early MacArthur funding enabled civil society groups from around the world to participate in the drafting of the ICC’s Rome Statute—the founding treaty of the ICC. Later, these same groups provided on-the-ground legal and administrative assistance to signatory states as they considered ratification of the Treaty and to the Assembly of States Parties as they met at the United Nations. At its height, over 2,000 faith-based, human rights, and civic organizations identified themselves as part of the Coalition for the International Criminal Court, a major Foundation grantee. MacArthur’s anchor human rights organizations played leadership roles on the Coalition’s steering committee. The geographic scope of the Coalition’s membership and its legal expertise were key factors in many countries’ decisions to ratify the Treaty in short order.

MacArthur also funded outreach programs on the Responsibility to Protect for NGOs around the world that greatly increased knowledge of this principle and likely influenced subsequent UN votes endorsing it.

Grantees in Russia, Nigeria, and Mexico used MacArthur support to take cases to regional human rights courts and commissions when national systems were unresponsive. Some of these cases resulted in judgments that had impact far beyond the specific facts, establishing precedents that can be built on for advances in human rights protections. A particularly important ECHR ruling concerned a case brought by a Russian group based in Veronezh that found a violation of freedom of expression in the conviction of a journalist for defamation because of an article criticizing a local politician. It was the first ECHR judgment finding a freedom of expression violation by Russian authorities since Russia subscribed to the European Convention of Human Rights in 1996. In Mexico, a grantee’s work on behalf of the family of a disappeared ultimately led to the amendment of the Mexican army’s military code of justice stating that human rights violations committed by soldiers against civilians will be prosecuted in civilian, not military, courts, and that the investigations of these human rights abuses will be carried out by civilian investigators rather than by the military itself. And, in Nigeria, based on the legal arguments of a MacArthur grantee, the court of the Economic Community of West African States declared that all Nigerians are entitled to education as a justiciable human right. It was the first time that an international court recognized citizens’ legal right to education. At the local level, MacArthur-supported crime-victimization surveys were used by the federal police to allocate resources more effectively.

What are your thoughts about the unique role of foundations in helping to address a critical issue like this?
Timing is important. The resources a foundation brings to an issue are tiny compared to governments and multilateral donors, but foundations can be flexible and move quickly to take advantage of big opportunities. Foundations are less constrained by political forces that hamper movement on politically sensitive issues that touch on state sovereignty. Foundation leadership can show what is possible and lend legitimacy to new thinking.

In our current time of global uncertainties and conflicts new and old, are you optimistic about ensuring international justice in the future?
Definitely optimistic. We have seen a period of unprecedented growth in the international justice system. Now we are in a period of consolidation that we hope will deeply entrench these new developments. Politics may bring some ups and downs, but the slow yet steady emergence of the regional courts and commissions with human rights jurisdiction illustrates the importance of institution building over time. On three continents, these institutions continue to stand firm in the face of political attack. They continue to implement administrative reforms and new ways to monitor compliance more effectively.

Criminal justice mechanisms that incorporate international human rights law into national systems and make use of international lawyers and judges continue to emerge—in Bosnia-Herzegovina, Kosovo, and, for Syria, a new investigative mechanism for documenting war crimes there was established by resolution of the UN General Assembly, bypassing the Security Council’s veto of ICC referrals. Two years ago, the former dictator of Chad (Hissène Habré) was convicted—by a special Senagalese tribunal—of crimes against humanity, war crimes, and torture, including sexual violence and rape. He was given a life sentence and ordered to pay more than $150 million in victim compensation. This culminated a series of prosecution attempts in Africa and Europe and resulted from unremitting pressure by victims and human rights groups—many of them supported by MacArthur. The existence of the ICC likely influenced the decision to hold the trial.

We must never forget that the international criminal justice system seeks at its core to give voice to the victims of atrocities and enable them to pursue justice. It can take years for justice to be done (over 25 years in the Habré case)—a powerful argument for a permanent institution like the ICC. It is difficult to imagine the world now without the moral authority of an ICC or a Responsibility to Protect. Of course, prevention of atrocities is the highest priority. Indeed, prevention is at the core of the Responsibility to Protect with other measures considered only when prevention fails. There is some indication that ICC indictments slowed the recruitment of child soldiers in the late 2000’s. But in the face of crimes like those in Yemen and Syria, a reckoning on behalf of victims is also called for. A strong civil society will be especially important over the long term to keep up the pressure on states to fulfil their responsibilities in the global criminal justice system. Even in the most repressive conditions in present-day Russia, brave human rights advocates continue to operate and win court judgments for those suffering abuse from the state. I am confident that MacArthur will continue its proud tradition of support for independent organizations and individuals who seek to make the world more just.

MacArthur has awarded grants to advance human rights and international justice since 1978, providing $362 million to support the work of 680 organizations and individuals.

The Case for an International System of Justice (speech) December 2007